Two weeks ago my boy Se7en interviewed Lumos about his change “from subby slave to Protocol Dom”. It was really interesting to read about his metamorphosis. The way he answered was great and I thought that I want to hear more about his point of view.

That’s the reason I’ve invited him for a talk at the fireplace.

MasterMarc: Hi Lumos, nice to see you again. Last time it was just for a few minutes during Darklands in Antwerp. As you have discussed with Pup Se7en, your fetish life has changed radically in the last few months. You call yourself a switch now but you’re acting predominantly as protocol Dom. Could you please explain what in your eyes a protocol Dom is?

Lumos: Hey Marc, it’s great to catch up again and always a pleasure to chat to you guys!

To me a “protocol Dominant” is a vague term referring to a Dominant who enjoys enforcing rules, rituals and behaviors upon a submissive or slave. I know few Dominants don’t who adopt some form of protocol – the classic being titles such as “Sir” & “Master” – but some Dominants are undoubtedly interested in going a lot further with that control and ritualistic approach to service.

This could be as straightforward as how a slave eats, sleeps, stands, sits or as micromanaged as when it may clip its toenails, cut its hair and so on.

MasterMarc: The advantage of talking to a switch is that he’s familiar with both sides. I know you loved rules and rituals when serving as a slave. Could you tell us why strict protocols had such an attraction for you as a sub?

There’s a certain liberation that comes from a lack of freedom. Where a slave has little control there’s very little for it to worry about; it need only focus on the moment and pleasing its Sir – not just to avoid a beating but because it wants to.

As I’ve got older I’ve found it trickier to get into that submissive headspace and when I have it’s felt less natural – I’ve felt more and more the desire to control the situation.

MasterMarc: Beside the protocol, aren’t rules and rituals something which gives security and safety to a slave?

Lumos: Absolutely – I think you’ve hit the nail on the head, it gives a slave some level of reassurance and routine.

Where there’s an ambiguity or flexibility in a Masters order it’s easy for the boy to make the wrong decision. If you’re a slave that wants nothing more than to please then that’s a truly terrifying prospect.

I’ve seen something being shared a lot around on Twitter recently on this subject which I couldn’t disagree with more:

Alpha wants you to throw him a fucking bone here bitch

And I think it fundamentally misunderstands how a bunch of subs “tick”. If a subs fetish quite literally is a lack of freedom then to ask what it wants to do is – while well mannered – fairly simplistic and naive.

The slave absolutely wants to do what you want; the whole point is it wants to relinquish control!

MasterMarc: If we talk about chats before a first meeting the question “What do you like as slave?” isn’t a wrong one. I ask it to see if it matches, if our desires and preferences are more or less together. Of course the moment a slave is with me, I don’t ask what he wants, because I know from the chats before, that if I do my program, if I ask him to fulfill my needs he gets also his satisfaction and I think at the end all involved have to be happy with, even if some (sometimes also some more 🙂 ) have an abusive character. 🙂

Lumos: I totally agree that on a basic level it’s sensible to ensure that the Master and slave are on the same wave length as a matter of natural compatibility.

With all that said, I’m completely of the opinion that a lack of control and power is an all consuming fetish in itself – to pamper to a slave’s interests in such a case I think can be pretty counterproductive.

Take me for example; when I was primarily a slave I know my dick would become flaccid whenever I was offered any kind of choice. Now that I’m focused on training boys I’m keen to make sure that doesn’t happen; eliminating freedoms and options might be time consuming but boy is it satisfying!

MasterMarc: I didn’t know that you’re able to get a hard-on. 🙂

If we talk about the Master’s side, are rules and rituals about making the Masters life easier? Or how’d you see that?

Lumos: I surprised myself 😉

Interestingly I don’t even think it’s about making my life easier – sure it’s lovely to have a slave as a footstool, fetching drinks or chained to my bed in rubber – but the effort required to train and look after a boy undoubtedly outweighs the benefits from its domestic service.

So for example; In the much longer term I’m looking to develop a slave for a TPE dynamic, one who won’t so much as piss, shit or cut a toenail without my prior approval. In that scenario training and maintaining the slave will take a long time – the joy instead comes from having total and unwavering power over another human being, the service is but an added bonus.

MasterMarc: I understand your desires of a TPE relationship. But you know if you really reach this point it also becomes an occupation for the Master.

Every decision he normally takes subconsciously will become a conscious decision on behalf of the slave. This will take time and will include moments when you just don’t have the time for it.

Lumos: Oh absolutely – the slave is the servant but the work is undoubtedly mine. I have no illusions about how much effort controlling and caring for a slave in a true TPE sense is.

I’ve done it in pockets during my sessions with my subs so far but I’d like to take it so much further – the idea of controlling and micromanaging another human beings life is immensely alluring, no matter how much work it requires.

MasterMarc: I have experiences with 24/7 (permanent) slavery. The boy was officially working for my company (so all the social insurances have been organised). Other kinksters have often told me that such a slave makes life much easier. I’ve told them it’s not easier but is absolutely more satisfying for me. And then I compared the situation with a theater play. The slave has a main role, as the master has, but the master is at the same time head of production, storybook writer, director and more.

Lumos: That’s really interesting, I rather enjoy your theatre analogy and I very much feel we’re on the same page.

I’m the kind of person who’s always busy so the idea of having a human slave to continually – as you put it, “produce” and “direct” – is really quite enticing.

You mentioned you had a 24/7 slave; if you don’t mind me asking, how far did you go with that and how did you balance it’s emotional needs with your needs as a controlling Master?

MasterMarc: It’s a real good question. To be honest it was an incredible emotional connection but it never became a romantic one. But the connection was still one of the deepest I’ve ever felt. It wasn’t unconditional, as a mothers love is, but it was in that direction. The slave wasn’t my partner, he was my slave. That made it much easier.

Se7en for example is my partner and that makes it much more difficult to be the “Master” I should be. It is always easier to see whole picture if you keep a little bit of distance. Do you have any experiences as slave or master with problems coming out of emotions?

Lumos: And did you feel the lack of romanticism was a limitation of the dynamic or just how you and the slave naturally fell?

I was romantic with one of my previous Masters; it ended up with him perhaps losing focus of why we were “together” in the first place. I have a sneaking suspicion this isn’t uncommon in TPE dynamics – something I’m very cautious of.

My current couple of boys are purely “utility” slaves, they serve a sexual and domestic utility for me but there’s little or no to emotion – at least on my part.

In the future I can envisage finding a slave I’d like to form a deeper connection with, because ultimately no one wants a dead-behind-the-eyes wooden LTR. I enjoy politics, international travel, clubbing and snuggling with a cute boy on a Sunday morning; it just so happens that in a perfect world the boy I snuggle with would also be my slave, follow my strict rules and remain chained and collared in my presence. A 15th century housewife dynamic on steroids if you will ^^.

MasterMarc: There has been no need of romanticism between us. I think it would have destroyed what we have had.

For me the ideal scenarios I have in my mind is different. It is an SM family. A master, an alpha (there probably is space for romanticism) and two slaves. We will see if I ever get to the point i can realise it. And probably also my ideal scenario will change with the time.

Also, do you think that you’ll not miss your submissive side in the future? I am asking as it has been an important need you have had in your past. Can this need disappear totally?

Lumos: That’s an interesting and noble ambition to seek. I’ve always sought the dreaded gay heteronormative relationships in the past and guess I will do for the foreseeable – albeit with a slave.

On the subject of submission, never say never (hence “switch”) but in all honesty – no. Towards the end I think I was purely a submissive out of habit rather than natural inclination and leanings; I’m far happier as I am now in a purely Dominant, controlling role 🙂

MasterMarc: Thank you Lumos. It was nice to have you here with me and I am sure we will see you soon again. 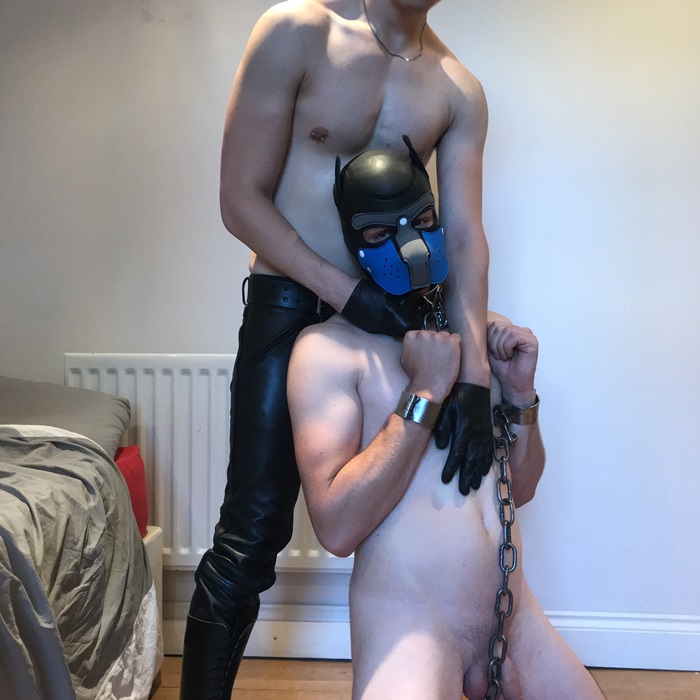