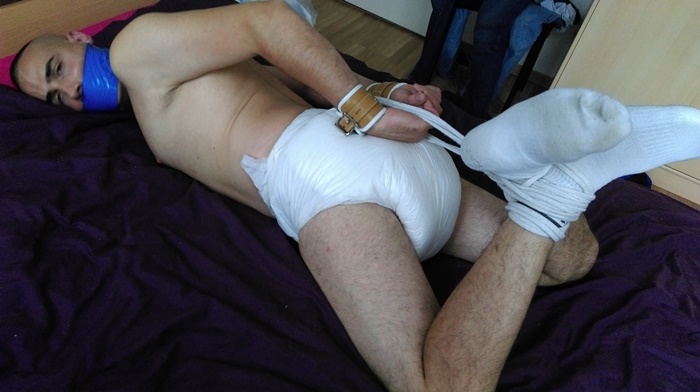 A talk with KinkyDemonBoy (25) about his DIAPER & BONDAGE fetish.

MasterMarc: Hi KinkyDemonBoy. Bondage is for several years your love but you have discovered a new love for a year now: Diapers. Can you tell us, why diapers are a turn on for you?

KinkyDemonBoy: Hi! When I started bondage at the age of 18 I was light years away from thinking about such a kink. It’s a friend of mine who talked me about them and said he’d love to see me tied up in them. I must admit I wasn’t feeling very comfortable and quite ashamed. But I think it’s that shame that turned me on. Wearing diapers is humiliating, especially when you go out in public with them or wear them in front of your friends. The smooth and soft feeling of plastic around my waist with that specific crinkling sound when you’re moving also made me love them. I got tied up in diapers and tied some guys in them a few times and that situation where you’re unable to move while someone’s enjoying humiliation really drives me crazy!

KinkyDemonBoy: The diaper friend I first played with was really into messing. I like wet games, especially piss games when geared up, but he wanted me to fill it up… fully! When you do this for the first time there is a kind of psychological barrier because you were raised how not to be that filthy your entire life. My friend helped me with suppositories to get things easier. I was so ashamed and he was absolutly amazed! But this is where everything started from. From that moment I began to enjoy the humiliation of being forced to wear something you can’t remove because you’re tied up or simply because you don’t want it :P. I must admit (with a little kinky smile) that I learnt how to like messing until it became something completely normal when having fun with diapers. Today I find it still a little bit humiliating of course, but this what turns me on, both as a top or dom!

MasterMarc: If you’re talking about “fill it up … fully” I suppose you’re talking about scat. How was it to shit in your diapers for the first time, having the shit there for a longer time and to feel how it becomes even more fluid and how it is smearing more and more of your ass?

KinkyDemonBoy: OMG, I was hopping you would ignore that question! But I like humiliation so…

The very first time was awful except for my diaper buddy who was laughing at me. It was truly disgusting and I was wondering how I could clean myself after. But this is how I liked wearing diapers. It became a need, something I really can’t do wihtout. Of course some guys can’t cope with scat and I accept it. I get used to the boy I’m playing with. However, to me it’s part of the humiliation game. When going out in public all diapered up or making a tied up guy, it’s both this combination of pleasure and “psychological pain” that makes shitting yourself so enjoyable. And it’s even stronger when the guy you’re playing with spreads the mess all over your diapered butt. You’re afraid to get discovered having done something forbidden!

MasterMarc: Is it for you a clean way to play scat games because you’re not having “direct” contact with the shit? And can you tell us, what kind of humiliating feelings you’ve had as you have had your full pants?

KinkyDemonBoy: In some way yes, it’s a clean way to play scat games. I mean I find it more exciting to see the shit through a hugely loaded diaper than having it directly on my body. I think it’s because the diaper fetish is stronger than the shit itself.

As for the humiliating feelings it was a mix of disgust and nausea because of the smell. Plus it was leaking and flowing along my legs. I was really living it as a shame. But I think shame belongs to Fetishism in general. This is how I can push my limits back. Not always of course, but it’s a way of doing it. Disgust is still a bit present now, but messing diapers on purpose or being made to do it offers me more pleasure than disgust. I’d also say it’s not disgust from myself but from others. Others seeing me as a piggy kinky guy and me loving it.

MasterMarc: It seems that you love to be presented as dirty little bastard. How important is it for you, that others can see you in such awkward situations?

KinkyDemonBoy: Well it’ll depend on the guy or group of people I’m playing with.

Of course it’s easier to feel comfortable with people I know and who share the same kink. In this case I show how filthy I like to be and how pleasurable it is. I do the same when topping, I like my boy to be a stinky diaper wearer that I use as a simple toy.

When meeting with people I don’t know it’s quite different. I think I wouldn’t expose myself in front of people I absolutly don’t know. But if I’m part of a group of close kinky friends who like me to get diapered, I’d feel – humiliated of course – but also excited by people seeing me in such a situation. Some would be maybe offended or surprised, but maybe would some be interested in chatting or playing with me.

MasterMarc: Let us talk again about the combination of diaper and bondage fetish. What makes it such a special experience for you?

KinkyDemonBoy: Bringing diapers and bondage together creates a powerful play environment. The humiliation feeling is stronger. You’re faking the fact you don’t like getting tied up in diaper whereas you’re actually craving for it. Your arms and legs are immobilized, your mouth is tightly silenced and you can’t do nothing but struggling with a thick plastic padding on your ass. And if your partner wants to push things on by using suppositories and see how long you can resist before exploding in your diaper, then it’s even better. You both enjoy the fact to be someone’s victim and a piggy bastard >:D.

MasterMarc: Do you have still some kinky diaper fantasies you haven’t realized yet? How do they look like and why haven’t you done it?

KinkyDemonBoy: I’d like to get diapered at work more often, being tied up in diaper in the trunk of a car then poletied in an abandoned factory, tanning diapered up on a beach, and also being forced to keep the same diaper until the other guy allows me to remove it. It can go from a few hours to several days. I haven’t done this yet because I haven’t met people up for it but -except for my job as I go through an airport security gate every day- here are the main fantasies I’m thinking about 😉

MasterMarc: Hope that you’ll be able to live your fantasies and I wish you a lot of hot new experiences in the future.