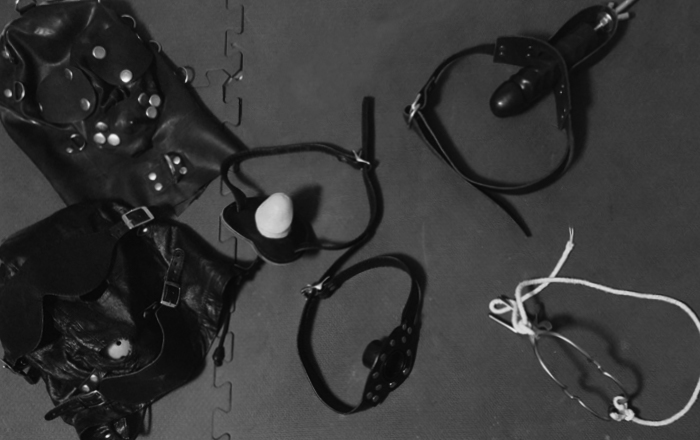 DIY TUTORIAL
15 Different Ways To Use A Spreader Bar

Need to keep a smartass sub quiet? There are many ways to do that. Traditional gags, of course…plus a few others.

Specific to this week’s tutorial, gagging your sub can be very hot, but be smart about it and use common sense. Never leave your sub alone while gagged, especially with a gag that’s deep or severely muffling (long dick gags, ball gags that could fall deeper into his mouth, etc.). If adding a hood, be extra careful and make sure the hood isn’t too constricting. You definitely don’t want your sub to have trouble breathing

Ok, so this part is generally pretty obvious. Just gag your sub, and you’re done. But just to this post isn’t too boring, I’m including pics of Gboy wearing each of these gags, some up close pics so you can see how they work, and a few extra tricks on how to keep certain gags in. I’ll also mention how Gboy rated someof the gags in comparison to the others in a little after-session interview I had with him. Gags may look hot, but until the sub experiences them, you don’t know if they will be tolerable or make his jaw sore for a week. Hopefully Gboy’s opinions will help clear that up a bit.

This gag generally fills a sub’s mouth with a thick dick, without being too long or literally making him gag on it.

Gboy’s opinion of this gag: “I think it would be easy to have this gag in long term because it’s smaller than a ball gag. (Least punishable)”

Gboy’s opinion of this gag: “This one was a real treat to try out. Especially the fact that it is adjustable and can be inserted more into the mouth with the Dom being in control of that. And be used as a punishment more and more to teach the misbehaving sub.” I couldn’t have said that better myself.

This gag is great for keeping a sub’s mouth open pretty wide and drooling. It’s also great for humiliation (drooling with zero control to stop drooling is typically pretty humiliating for a sub). The hole in this gag is not large enough to get an average dick through. See the next gag if you’re looking to hold your sub’s mouth open for some dick sucking or other types of oral service. Gboy actually calls this gag the “Drool Master”, and rightfully so. 😉

Gboy’s opinion of this gag: “(Drool Master) – This was my favourite gag until I got to try out my number one, but before that, this gag is perfect to keep the subs mouth gagged but still accessible. From my experience this gag causes me to drool the most. Having the feeling of humiliation that comes with drooling, it has been a fun experience every time using this gag. Would always recommend. (Most exciting)”

Like the open-mouth gag, this gag is also great for keeping a sub’s mouth open and drooling. Unlike the open-mouth gag, this gag can be ratcheted open in small increments to keep your sub’s mouth open wide enough to allow your dick, balls, additional gags, or pretty much anything you can fit in the space it creates. These gags tend to fall out very easily if the sub opens his mouth a bit wider than the gag is forcing it open, making them pretty useless, unless…To avoid this, just run a rope from one hinge to the other, tighten it up behind your sub’s head, and tie it off.

Here’s an example of what you can add to this gag. Why let the sub’s forced open mouth be wasted, right Doms? 😉

This is a nice hood for those into rubber, subs that want to be extra discrete in photos, or for a bit of sensory deprivation (covered ears). This hood has removable eye patches and a removable, inflatable rubber penis gag. Both are secured with snaps so it can be a bit cumbersome to snap things on and remove them, especially without pinching your sub’s skin at all.

I used this hood on @hushpuppy1980 when he visited once, to help in putting him through an escape challenge (as well as on another sub, in a different escape challenge). It allowed me to hood him with the eye patches in place, get everything tied and cuffed the way I wanted it without his prying eyes peeking, then simply remove the eye patches when I wanted to let him figure out how to get out of his predicament…while still being able to take discrete photos. Removing a simple blindfold in that case just wouldn’t have worked. 😉

Gboy’s opinion of this hood and gag: More confining with the rubber surrounding his head. He also thought the gag tasted rubbery, of course, which was a bit of a negative.

This hood, like most hoods, is also great for a bit of sensorty deprivation. It covers the sub’s ears with a somewhat thicker material than a rubber hood. It also helps keep things discrete for photos. This hood makes it much easier to pull a blindfold over the sub’s eyes without having to secure 6 snaps like the rubber hood above. It also has a removable ball gag (you can see the yellow ball gag in the close-up if you look for it) which snaps on at any of a few different points for different feels. You’ll want to decide whether or not to use the ball gag before you put the hood on, since it can be a pain in the ass to get the ball gag under the hood once the hood is secured. There’s also a cover for the sub’s mouth which you can pull up. Both the blindfold and mouth cover have buckle straps that are adjustable at a few different points so you can make it tighter when necessary, depending on the size of your sub.

Gboy’s opinion of this hood and gag: Nice leather hood. He thought this one felt pretty hot, and the ball gag held his mouth open pretty wide and not so comfortably after a while. Great for punishing a sub though, with sensory deprivation with all parts of the hood used, and a large ball gag forcing his mouth wide open.

Go check out bondagepredicaments website. He has loads of more hot stuff you might wanna look at.