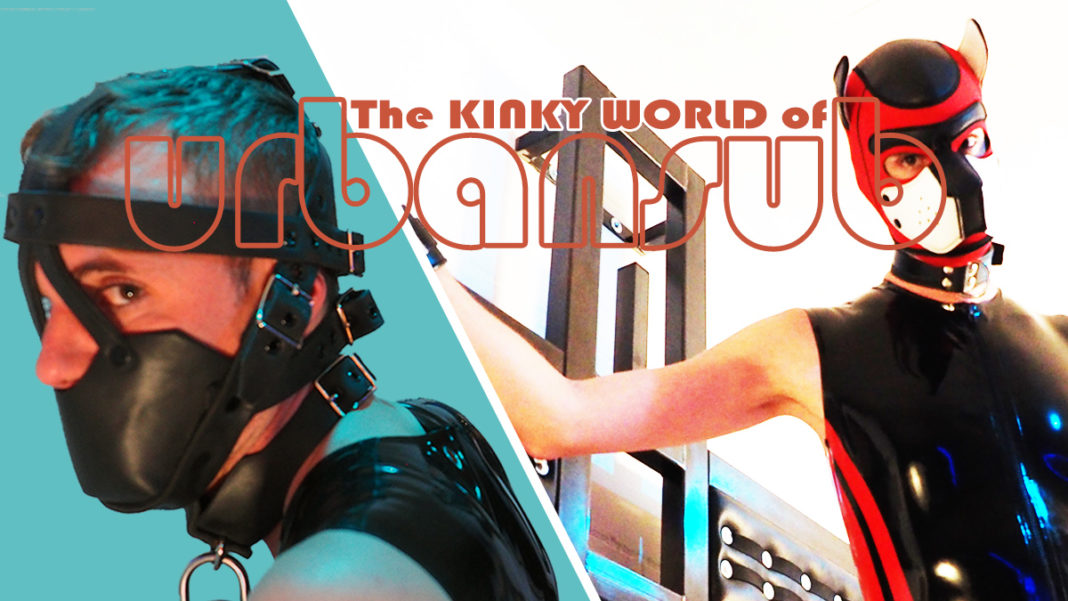 About two years ago I walked into a bar in France and saw them: dogs. Everywhere. Guys with masks, paws, collars, furry suits.

Damn, have I come a long way since then. It all started with MasterMarc’s puppy, Se7en. While taking some photos for this column he let me put on his neoprene puppy mask, the standard model from Mister S. Leather, as he explained. I looked at myself in the mirror and it was love at first sight. Like when you are down at the animal shelter and you notice this one dog in the cage looking at you with his sad eyes. And you know: You are going to take him home with you no matter what and he’ll become your best friend.

That’s what I did. I adopted my inner pup. The next two hours I ran around the dungeon with his mask on, staring at myself in the mirror every damn minute, with a hard on. The puppy tail plug Se7en shoved up my ass kind of contributed to the whole experience. I knew I needed a doggy mask.

And that is how Pup Jambus was born. My new dog self. But so far he hadn’t seen the world yet, just a dungeon. (And as nice as MasterMarc’s dungeon is, I wouldn’t say it compares to the world as such.) The first time I let Pup Jamus out of my apartment was to a sex positive party. My friends and I drove an hour to some club and while standing on the stairs waiting in line for the coat check I reached behind and awkwardly plugged in my tail.

I was one of few dogs at the party. And somehow I had been expecting to get more attention. But the usual harness-wearing topless top muscle queens were so afraid that underneath my mask there might be an unattractive face hiding that they stayed away from me as if I was carrying rabies. Oh boy, animals not welcome, I thought to myself.

But then something odd happened. I started losing interest in the haughty tops that circulated the back rooms and my eyes wandered off to the bottom boys.

Now, it should be mentioned that for years and years I had been an almost exclusive bottom. Not sure why, it just seemed that it was my natural place in life, especially because I’ve got a medium sized cock and the top floor is resererved to the extra large ones. Plus, to be honest, very few guys attracted me from behind, if you know what I mean.

But that night, being newly born Pup Jambus I suddenly started to fuck bottom guys. And boy did I have a ball (or two). The adrenalin must have rushed to my brain, it was like something I had hidden for years had burst out. The next few hours I enjoyed being a top dog. And the bottom sub boys seemed to like being fucked by a vigorous pup in his very late adolescence.

I often heard people say that getting a dog had totally turned around their lives. That made sense, considering that looking after such a pet demanded a lot of energy. However, I had no idea you could simply order a neoprene puppy mask from San Francisco and get the same effect.

This, dear reader, is how the dog thing brought out the top in me. He doesn’t get out a lot. But when he does, he roams rather freely in the tight holes he can find. A service dog, as MasterMarc calls Jambus.