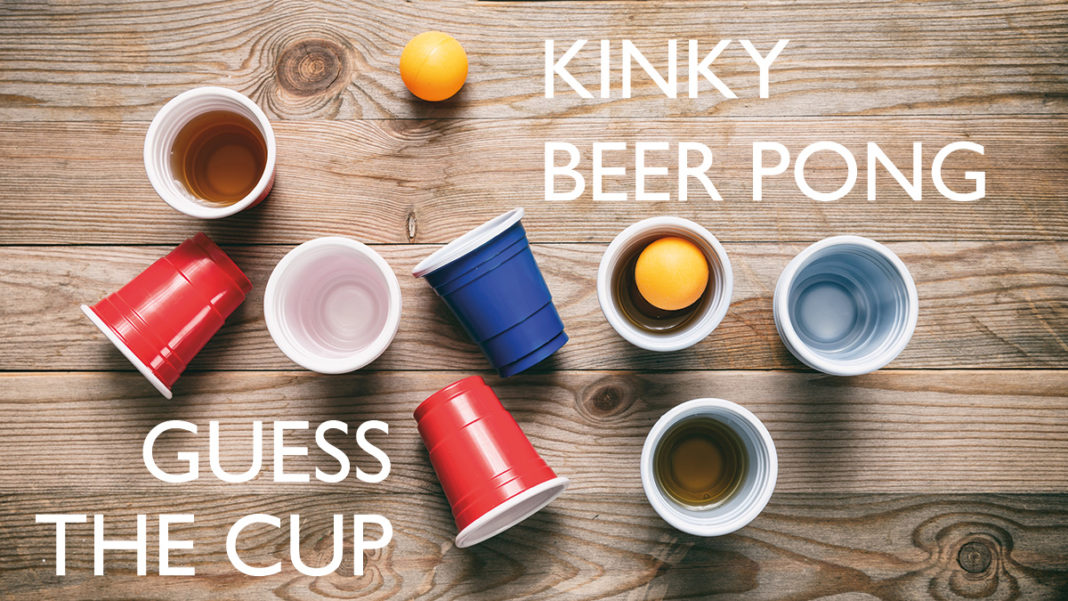 This is a slight derivation from your usual frat boy game. The rules are very much the same. Except for the drinking part.

If you are worried about spilling the beer, you can also put a tarp, or beach/kitchen towels underneath them or the table. There’s also the trick of putting water in the game cups and preparing an equal amount of cups with beer somewhere else.

Alright. So for those who never played it and don’t know the rules exactly, here’s how beer pong goes.

There’s also the team version game if you have a long enough table.

Gentleman’s rule is to keep one’s elbow behind the table, else the throw is invalid.

Depending on the intensity of the game… you mayyy also want to prepare a bucket. Just in case someone has a bit too much.

So far, so easy to understand. Already sounds like fun. However there’s a way to make this game more exciting and also kinky.

I’m sure some of the readers already played the game like that. There’s no need to only put beer into the cups. You can also put other content in there. And the one throwing the ball is required to drink the thing inside the cup.

If you are worried about spilling the contents again, or do not want to reveal them, you can use the a version of the trick mentioned before already. Prepare two sets of numbered cups. One set filled with some water, and one with the other contents. For the latter it’s recommended to use numbered carton cutouts to prevent players from cheating and looking into them. The number of the sunk water cup corresponds to the one the player has to drink.

One liquid that comes to mind for making the game kinky quickly is Piss. You can put a random amount of cups full with that liquid instead of the similarly coloured beer. But that’s not all that you can put in there.

Or if you are more of a punishment kinda guy:

Another thing you can do to kink this game up is a joker card (or a object named a joker object). You can put it in one of the cups. The one who throws it has to fulfill a predetermined kinky task. Like becoming the evening bitch. Or becoming the evening dom. Whatever floats your boat. You can also have more than one joker in the game if you want.

Mix a few of these things with not so horrible drinks and things. if it’s above 4 people may start to get discouraged to play the game, so maybe keep it under that. Below that keeps it interesting and has the promise of beer with some slight risk, so it keeps being fun for them. To add the torture you can add a minimum amount of seconds to keep the fluid or thing in the mouth before swallowing.

You can also prepare a winner/losers task for the one with the most landed hits. And if someone tries to chicken out by missing the throws on purpose, just prepare a particulary nasty thing besides the table one idea is to mix random alcohol mix with gummybears, or mix of leftover drinks. Just think of the nastiest combo you can think of. You can set up a rule that you have to take a sip from it every time you miss, or a full cup if you miss 3 times (or similar ones). You can also set another punishment task if you want. Whatever you think may encourage players.

The classic college game becomes a fun dare-guess game like this. And it’s easy to do without much preparation in holidays somewhere, and with the water cup trick also at parties or at a home fun evening.

That’s it for this game. I wish you a lot of fun trying. If you have or find some good techniques and tips, why not post them down below or write us a mail at team@sadosam.com ? If it’s good we’ll put it in 🙂 Or write us on twitter what you’d like to have next.