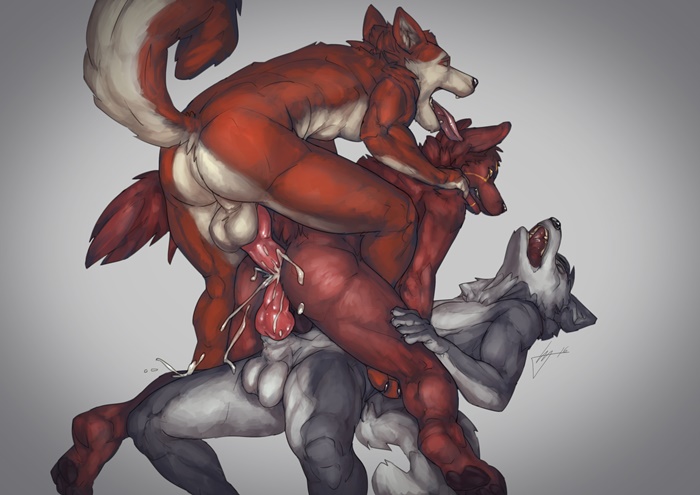 A talk with the kinky illustrator Deus Ex Moose (26) from Melbourne.

MasterMarc: Hi Moose, last week we have had an article about furry sexuality on sadOsam. It seems that in their fandom it is not really accepted by non sexual furries, that others show their sexuality. So it is not easy to find guys who show the kinky life of furries to the public. But at the same time kinky furry art seems to be very popular. Can you probably explain us, why the kinky furry art is more visible than real furries having sex?

Moose: Hi MasterMarc. I think the simple answer to that is the internet makes a lot of things possible. The fandom itself is based on fantasy, sexual or otherwise. It is about anthropomorphism (attribution of human characteristics or behaviours to animals or objects) in popular culture, fiction, and spirituality, but unlike other fan bases that revolve around existing canons and narratives the furry fandom exists because of its fan base. A lot of inspiration comes from existing fictional universes eg. Disney, Marvel, old children’s cartoons and storybooks, but furries create their own universes where they can explore a side to their personality or interests that they couldn’t do elsewhere.

Yes, there is a bit of stigma surrounding the adult nature of furries and how they are represented in the media, however there’s always an appropriate time and place for these things. Sex is still a taboo subject in many world cultures, so it’s no surprise there are people who get upset about public displays of sexuality in the fandom and I think some people forget that. Many furries wouldn’t be comfortable telling their family or work colleagues about their existence in the fandom, let alone their sexual interest in foxes who stand on two legs and have seductive bedroom eyes. Some furries may not even be comfortable admitting their desires within the fandom, so using art as an outlet to express their fantasies using alter egos, or fursonas, is quite commonplace.

MasterMarc: I’ve to say that i really love your illustrations. You have also a good mix between kinky furries, kinky pet players and it seems that you’re attracted also by rubber. Can you tell us what kind of motives attract you to draw and why?

Moose: Thank you. I guess it’s like anyone who’s into fetish, that some things just turn you on. Being an artist I also have a strong aesthetic attraction to this stuff, but there is a lot more underneath the surface. I’ve always had a love for shiny things, skin tight clothing or anything in black. I also like dragons and werewolves. As a youngster I would often pretend to be a dog and bite people’s necks (I guess that’s where my kink for transformation came from). Science fiction is a big motive of mine as well, I constantly find myself looking at 90s anime and film for inspiration when I draw or paint. Even the odd sci-fi or fantasy novel can really stir the imagination, but there’s something about anthropomorphism (or anthro for short) that continues to grasp my attention and make me want to explore it further. I don’t know where the fascination came from, but seeing as how anthro is a recurring theme in so many cultures and mythical lore it’s hard to ignore it.

It wasn’t until recently (about five years ago) when I started exploring my sexuality more that I found myself into a whole new world of fetish, in particular, rubber and pup play. They were two aspects that I could live out for real, and now they are a significant part of my life. I suppose that’s the other reason why I love illustrating it so much, because it’s something that is tangible and, of course, really sexy.

MasterMarc: Would you say that you can also live some fantasies with your pen which you can’t live in the real world?

Moose: Oh definitely. While most real world fetishes can replicate the core themes, such as rubber, bondage, D/s and pet play, there are some things that aren’t exactly physically possible. Now I do have to mention that some more hardcore kinks illustrated in furry art can be over the top, for instance hyperphillia (where certain appendages are bigger than the user’s entire body) but I like to think of art in this case as an exaggeration of certain key elements that people find arousing in order to heighten that desire. Example, I am a fan of transformation. In some of my work I’ve drawn characters being consumed by a sort of sentient goo which resembles liquid latex. It takes over the host and converts their skin (or fur) into rubber along with the rest of their body. It’s incredibly sexy to imagine. However, in the real world, I would put on a rubber catsuit and pup hood, which to me symbolizes the process of transformation into a dog. Both art and real world fetishes engage people on a psychological level, but where reality reaches a physical limit, art pushes the boundaries of your imagination.

MasterMarc: Are you drawing cause of the satisfaction you get or is it the audience which motivates you?

Moose: Neither. I draw to constantly discover more about myself and push my technical ability. The more I draw the more I improve, and the more I can pull from my imagination to show the world. I guess there is a certain level of satisfaction, but I don’t see it that way because I feel to be satisfied means to stop improving, and I can always do better. You could say that’s a life lesson in itself haha.

MasterMarc: What kind of new kinks have you discovered by drawing?

Moose: That’s a good question. Hmm. I think I’ve always been made aware of my own fetishes, either through trying in person or by seeing photos on various kink related websites. Before I started engaging in the fetish lifestyle I was mostly drawing feral dragons with huge penises inflating poor furry critters like balloons with massive amounts of spunk as they orgasmed (probably originated from my old obsession with dragons and kink for blowing up big shiny balloons). Nowadays I’m drawing a variety of fetishes that are more grounded in reality, with emphasis on the gear and sex scenes. So if anything, I guess it’s my discoveries outside of drawing that have pushed the direction of my art. Mind you I still like drawing odd stuff now and again!

MasterMarc: Now you have really to tell us, how you’re living your kinky side in your life.

Moose: Well in case you didn’t already guess, I’m a dog. Funny that coming from someone who goes by the name Moose isn’t it? (Not to be mistaken for DaMoosePup, who you might know from MHWAP.)

I go by my handle Indigo (or Indigohond if you find me online). I enjoy gearing up and being a rubber dog when I can. It became an active part of my life when I met my current partner Lance (Kendokitsune) some years ago and haven’t looked back since. We live together with our alpha King (Kemmek) and are part of a small pack with three other pups. Lance and I are also admins of VicPAH whom are responsible for all pup play related events in Melbourne, so we give back to the community when we can. I sell t-shirt designs and other apparel on the side, most of which is kink or pup play related too. You could probably see by now that a lot of aspects in my life do revolve around kink, but I also try to have a social life outside of that. It’s all about keeping a balance.

MasterMarc: Wow that sounds really interesting. Btw. Where can people get your t-shirts? And of course to keep the balance is important. To be honest my kinky side is becoming heavier so that the balance is not totally given. If you say that you and your bf live together with your alpha King means that, that you’re living a three some relationship with a hierarchy?

Moose: That’s one way of looking at it. The hierarchy is strictly in the pack sense, and my partner and I are both betas so we help run the ship (or take over when the captain gets a bit lazy). Otherwise we all contribute to each other’s lives equally, by sharing our needs and responsibilities. Sometimes the scale is tipped to one side or the other, but like I said, keeping balance is important!

You can find my designs at RedBubble here: redbubble.com/people/deusexmoose

MasterMarc: It seems that we have really to talk again soon. It was great to have you here with us and we wish that your creativity will never end, so that we can see more of your kinky illustrations.