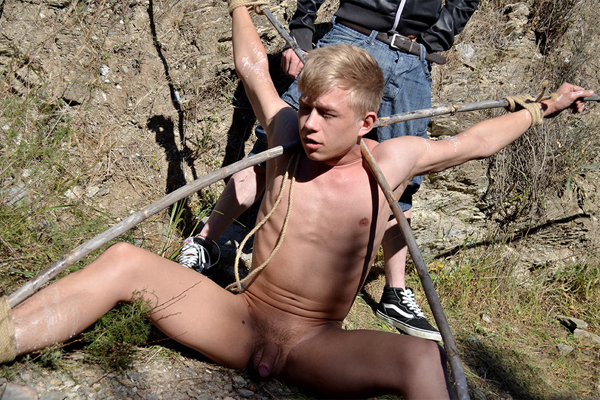 One November morning last year I wake, showered, had breakfast and headed to the office with no idea that I would meet a boy who would be featured prominently on BoyNapped over the coming months.

When my team first introduced me to Chris Jansen he was a shy Danish boy, here to film his very first solo for iconic website BlakeMason. He had flown his blue eyes, toned body over 2000 kilometres from Copenhagen to our studio in Manchester and boy, this boy was cute, handsome and oozed sex appeal.

As the evening continued the conversation moved towards his darker interest in bondage, submissive role-play and pain. By the time the evening ended arrangements were in place to film Chris for our award winning site BoyNapped.

From that very moment a strong, addictive bond was forged between us – site, the team of BoyNapped and Chris Jansen.

Since November, year 2015, we have filmed countless movies with Chris at our studio in both Manchester and in Spain, He’s here with me right now, almost never has more then a tight pair of shorts on, fills the air with his toxic sexual odour and keeps me in an almost constant state of hard cock.

Yesterday we finished another film with Chris and Charley Cole and let me be absolutely clear, Chris took his punishment harder then I have ever seen before and still remained erect delivering a powerful, eye popping climax that left him shacking, drained and begging to go again.

I’ve had the privilege to watch the majority of Chris’ movies in production and I can tell you this, you have so much to look forward to.

As a sneak peak and to keep you all on the edge Chris and I to time out to shoot you an exclusive photoset in the rugged mountains high in the Province of Almería, these are just a bit of fun so please enjoy everything Chris offers, I do daily 😉