Hello dear readers, we’re talking to Snoopy, a cute kinkster from Vienna. Come on Snoopy, tell the people a bit about yourself: How did your kinky journey begin? When did you first realize what you’re into, and how did you first live it out?

Snoopy: Well most children play cops and robbers – in my case sadly only rarely, because it was an unusual sort of fun. The thrill to hunt your fellow players or become their prisonder, best of course relentlessy tied up, and then bear whatever happens… that it was not only excitement but also arousal I only realized much, much later.

Uff, that wasn’t really without a risk, was it? If something happened you wouldn’t have been prepared or ready for bodily or mentally, I mean. Was that no issue for you with that session? And how did it continue after you licked blood? What was the first thing you set out to try?

A blind date like that time would be unimaginable for me today! I’m opposed to playing out previously arranged/set up programms during sessions, but that makes it only all the more important what my counterpart expects, what he likes, and knows what it’s going into. That time I think No-go’s and Likes were talked about but everything further was of no matter to me. I just wanted to be in cuffs and experience how it is to be a slave. 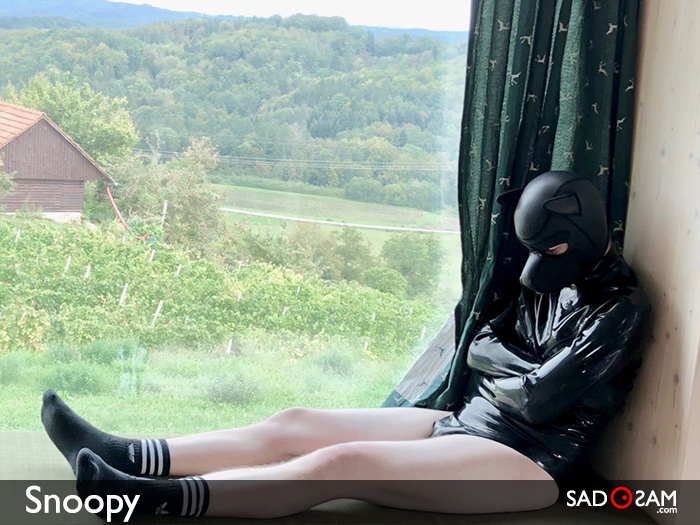 The next thing that catched my drift was chastity. Actually really only a small side note in a chat once it just didn’t go out of my head again, and was then the second adventure with another Master. A hot session, and at the end I walked back home with a cage around my dick. It were 2 very exciting days, especially at the university it was a constant state of fear and horniness. There was a lot of potential in that 🙂

The moment it makes “click” till it comes off, I enjoy the thoughts of not being able to wank.

For me it was something that immediately intrigued me when I first saw one at my Master’s dungeon hehe. Sooo….did you explore that potential too 😉

I am still finding myself into that whole thing to be honest, dragged from the urge to find an inescapable model and the fear of being locked permanently. Not to talk about that it may catches attention from others. But at the moment it makes “click” till it comes off again I enjoy the thoughts of not being able to wank out of my own will. To not being able to have sex but doing Everything that comes near that and become more and more willing…

Hahh the eternal search for the right model. Sadly only know that too well xD And the rule too, only with some additional regulations 😉 Well, you surely built up and quite a spectrum of fetishes besides chastity by now. What are your favorites?

Hehe additions and regulations? Inspire me 😉

One thing that was a plus right from the start for me was rubber, first and foremost how hot most guys look in it! I don’t even spend half as much time in it as I would like to, cause I’m too lazy to wash it, but latest at parties it’s a must for me. Though I’m more for shorties there, else you can’t stand it after a while from the heat. I also came upon pup play after a short while, coming out of a Master / slave relationship in where the sub was just kept and treated as a dog.

You can fool around and playfully bite people to be tied up the next moment and have fun.

Only within the last years that changed a bit and even though the initial thought of being forced into that role still gets me going very much, I discovered more and more the fun of developing an alter ego as a pup. Comparing to serious SM it’s a more easygoing approach. You can fool around and playfully bite people (butts are my big passion 😉 ) to be tied up the next moment and have fun and suffer in the old known ways.

And added to that (not alone because the puppy hype seems to keep going) you can easily and casually get in touch with new people and find friendships with others who are sniffing around as pups. Just with a bark!

You as well then?^^ Well in the end dog play does have a clear sexual aspect for me, and I can understand that different opinions clash together in the discussion if it’s an “style of play” or a “lifestyle”.

With growing experience quality has become more important to me than quantity, and I have to confess that in choosing my play partners I’ve become increasingly picky. Just because I have found my mate for life and SM and fetish have place in our relationship, the playing with others are more a complementing thing. There are people who just mastered various playstyles very well, and others who you share a fetish with that your partner has not such an affinity to. That’s how some friendships have deepend over time, which I’m very grateful for.

I want to get to know the person that wants to play with me, I’ve become curious and fascinated.

It is definitely about great consensus, or in other words connection, and exciting experiences with people you trust. To find time on the side for new aquintances is, apart from the organisational challenge aspect, quite strongly dependant on the personality. Before wasn’t so important who my Partner was, as long as you had some understanding and could do something together during a session. Now I want to get to know the person that wants to play with me, I’ve become curious and fascinated what great personalities hide behind those masks and fetish outfits.

Hehe there really quite a few interesting people in the fetish scene, you discover that quite quickly after interviewing a few of them :))How does such quality show iself to you? Can you give me an example?

Quality in a session means having a lot in common between the participants. You share the same fetish and practices. I for once love bondage and acknowledge and appreciate this effort the artists of that craft put into it. I have a friend who does that very well, ropeworks where you can just hang out in and are at the same time very aesthetical. Best in rubber of course 😉 And in addition you got some basis for discussions and talks before and after already and know reactions to certain things…

Same thing goes for my relationship where we are just so attuned to each other that a new kinky idea may not even needs to be talked about before you implement it together. Ideal is of course a meet with a group of friends who all more or less like the same things and after you had a fetish dinner play together before going in your bondage sleepsack for the night…

To take thime for something like that is definitely different than a date where the other guy may also appear in rubber but just wants vanilla sex – that’s just a pity, considering the effort.

Uhh yeah, one should at least wanna discover each other at such meets in my opinion. So from what we hear from your stories you seem to have tried out a lot. Are there things you still haven’t been able to cross of your list yet? 😉 And what’s on the no-go list for you as well?

Hehe, oh there are always fotos on some timestreams where one’d like to have been there. I see quite a few things I missed to do yet, like trying out a bitchsuit/dogsuit or get put into a all-cover chastity belt. Or, like in the camps, to fulfill the role you usually get into only a few hours  for a full weekend or longer instead, being slave or dog. That is frightening and intense, but at the same time also a challenge for which I’d be up to^^

No-Go’s…as you are a lot chaste yourself you may know that the actions you are not ready for continue to get fewer with every day you stay horny. But sure there are things like scat I’m decidingly dreaded by or needles for which I have too much respect. Essential for me as well is that I constantly want to experience what is going on and never could or want to do something (or someone) in a (drug) rush I wouldn’t be able to otherwise. I want to be able to feel and savour all this fun to all my abilities. And that’s the most important thing after all.

Haha yes the borders are something that shifts all the time with the person and his horniness.  And you are right, after all, a good time is the whole reason for doing this whole thing ;)) Thank you for your time Snoopy, and I hope we’ll talk again soon.

10 Safety Tools for Fetish Play that can save you