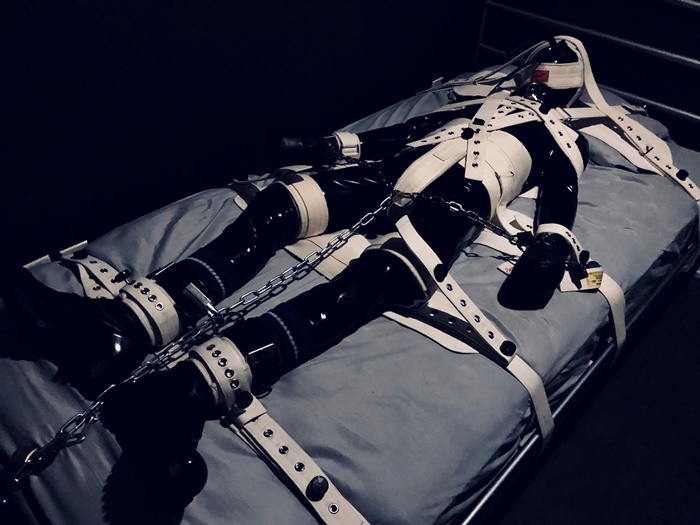 I find the Segufix excellent for torment and torture sessions.

MasterMarc: Today it probably looks a little like we would do a report out of a psychiatric clinic, but we aren’t. We are visiting Josh, who is better known as Seabondagesadist, a real bondage enthusiast from Seattle. On his Tumblr you can see that he is doing from time to time also bondage sessions with Segufix, a medical bondage system, which most of us know from movies which are playing in psychiatric clinics. Hi Josh, when have you discovered Segufix as bondage tool for kinky sessions and why do you like to work and play with it?

The things I very much like about it are: First how secure it is as a restraint and second:  That it is comfortable for the captive and one can be kept in it for extended periods with proper monitoring.

MasterMarc: Can you give us an idea for what and for which kind of scenarios it is great to apply Segufix?

Josh: Personally I love it in combination with a rubber catsuit. I love the way it looks and I love the intensity of the bondage it creates. Encasement is an area of bondage that really appeals to me from both my dominant and submissives side. From there I’ve employed other items of interest. Long term bondage has long been a passion of mine and the Segufix is perfect for that especially with rubber encasement. It’s comfortable bondage but unyielding at the same time. Several hours locked in and with the subject in a proper headspace it gets intense in a very good way. Another thing I have very much enjoyed getting into with is electro play. And with the right submissive electro torture. Segufix is perfect bondage for electro torture in my experience. It’s soft, but again unyielding. A submissive can really struggle in it and some of the hazards of other methods of bondage are diminished some. It is made for patients to struggle safely after all!

MasterMarc: For many subs in bondage the first goal is to try to escape out of the bondage. How safe is Segufix and how have been the reactions of your boys as they have made their first Segufix experiences?

Josh: In my experience the Segufix is safe for a good struggle and escape attempt.  Keep in mind that it is designed and made for use on individuals that do not want to be restrained but are being restrained for their own safety as well as everyone around them.  The material is soft and comfortable.  The system itself does allow for some limited movement. However when the limit of that movement is reached it is solid.  The Segufix is not run of the mill bondage restraints. It’s truly institutional .

I have found two types of bondage guys surrounding the Segufix.  One who knows exactly what it is and what it does, and those that have never heard of or seen one. Nearly every ride the first thing my willing captive has done is test the solidness of the system. To see exactly how much movement there was and if there was a weakness that could provide escape.  I don’t believe there is if it is done properly. I did the same exact thing. I was fortunate in the regard that when I told my husband about it’s arrival that he insisted I get get the first ride in it. We put it together and I went in for few hours while he watched TV in the adjacent room. I struggled as much as I was able for the first hour.  And then I gave in to the helplessness of the bondage. I feel that gave me an invaluable insight into not only it’s function, but the feels and headspace it elicits.

MasterMarc: For what kind of sessions and what kind of action do you use Segufix? Are there more possibilities than just to use it for long term bondage?

Josh: I find the Segufix excellent for torment and torture sessions. Electro stimulation has been a new found favourite of mine. Additionally I’ve had a great deal of fun simply watching a captive struggle in it.

MasterMarc: Now you’ve really to give us an insight into some of your hottest Segufix sessions. ? And can you tell us, what makes these sessions so hot for you?

Josh: That is quite simple. It’s the bondage itself that makes it hot for me. The power exchange involved is at the core and a large element but I still say that the bondage itself is the best. When you strap and lock a willing captive into the Segufix, offer a gag and they accept, and then step back and invite him to give it a good struggle to make sure he’s really stuck it’s simply just got to watch and then inspiring.

MasterMarc: Can you also tell us a little from some of the sessions? 😉

Josh: Oh lots to unpack there. Most recently a dear friend came over for a ride to hang out and see what we might get up to.  He ended up in the Segufix for an hour of isolation and struggling while I watched him on a security camera from the comfort of my living room. Before going in he and I discussed what he wanted to happen after. What he was after was some mild to medium breath control. I set a timer and left him to struggle.

I came back when the hour was up, immediately pushed a ball gag in his mouth and tapped it in. After he was properly gagged it was time for the breath control he really wanted. He needed to feel stuck an helpless. So I made him feel stuck with the bondage and helpless when the plastic bag went over his head. Completely at my mercy. His mind went to a lovey submissive place.

MasterMarc: What was the longest time you’ve had a sub in Segufix with you?

Josh: The current record stands at eight hours. The captive was in his rubber catsuit and locked in for the day. He asked me to promise to not let him out no matter how much he begs. I was only too happy to oblige.

MasterMarc: And was he begging to let him free?

Josh: Around hours five and seven it got really difficult for him. He was begging at hour seven then. But in the end he most definitely did the entire eight hours.

MasterMarc: Can you give some advices for Masters who want to use Segufix for the first time? I think it is not  necessary to give an advice for subs or do you think it is?

Josh: he first piece of advice I’d have for someone that wanted to use a Segufix would be to get in one yourself first off. I had never seen one in person before I purchased mine, but I was the first person in it. By feeling and experiencing how it feels, the very limited movement it allows you can get a feel for what it is capable of and how to best make it align with your own bondage needs and wants.