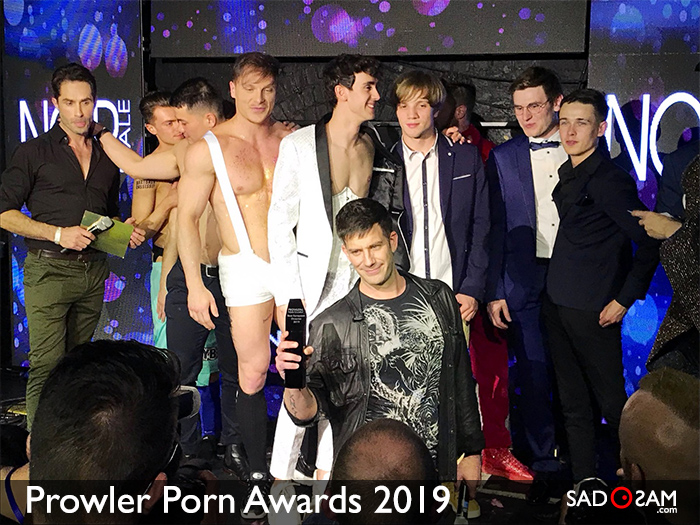 Hey! Thank you very much! This year’s event was even bigger than last year. The huge red carpet was a BIG hit this year. We even had to start the ceremony 10 minutes late because the red carpet was so busy! haha.

That sounds great, but I’m sure the red carpet was not the only highlight of the night.

Noo, there was so much going on this year! It was so nice to see Chi Chi LaRue back on our stage and of course the wonderful Mr Pam interviewing everyone. The turn out this year was huge. We had Bel Ami, Staxus, Helix… so many studios turn up.

We also had a few newbies there and of course the beautiful Bel Ami boys Paul Cassidy and Sven Basquait!

But now it is time to know more about what Jordan has done on the sling 🙂 Hi Jordan, as much as I’ve seen you have had real fun during the awards and the party. What have been your highlights of the event?

The red carpet this year was stunning, it was such an amazing vibe, the layout was beautiful and it was just an awesome space and energy to be in. Also getting to see Curtis Edwards win his award was very heart warming, he’s a good friend and I’m super proud of him! I think many people also know I had a hell of a lot of fun in the dark room at the after party, the guys from Jock really know how to throw a good party.

How sexy was the party in your eyes? Did all these sexy guys find together for hot action?

I was filming some interviews for Hung Young Brit for most of the night, but I did get a chance to catch up with lots of performers and producers that I haven’t seen for a while, which was great. Unfortunately, as I was filming outside i missed a lot of the acts, but it was still great seeing everyone again.

Well, once i was finished filming i was able to slip away to the darkroom for a couple hours, have no idea who i fucked in there but i was definitely in more than one hole that night!

It was definitely getting the chance to hang with all the beautiful British/Europe boys at the prowler awards.

Hehe, i can imagine. Such events and parties seem to be different in Europe. Can you tell us a little about the differences between such events in the U.S. and Europe?

Well to start off the awards in America don’t end with a sex party haha 🙂 but other than that i’d say they are pretty close to the same except all the models normally are dressed in a tux or something, but taken the fact that in was an award show turned into a sex party it definitely makes sense that everyone didn’t dress that way.

Hehe and have you enjoyed the second part of the party? Did you also have some action?

I enjoyed in the second part last year, but not this year. I got carried away with conversations with other models who attended.

As last interview partner we have to talk with one of the absent.

I am very excited for this award. I had 8 nominations. But I have won one. I really wish I had been at the ceremony but the renewal of the my visa arrived on Friday. I was very sad to not be able to attend. I hope everybody has had a great party in London.

I hope next year Viktor will get his visa by time so that he can attend to the event. Out of my own experience London is a great city, this event is really fun and if you like to meet some of your favourit actors in real life it is the place to be.

If you need someone who is wanking with you, so check out who of the cam boys is online now.

A Splash of Color