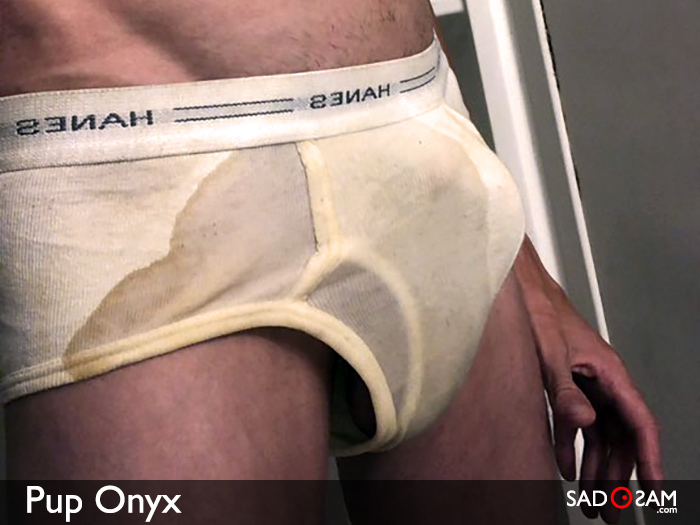 Cumdump, pisslover and faggot … that are the denomination a pup from Colorado is giving himself. That sounds to be an intersting guy and so I’ve had to invite him for a little talk about his dirty desires and needs. Hi Onyx, your own describtion on social media made me really curious. Are you really as usable and dirty as you promote yourself?

I do consider myself a dirty boy/pup and open to be usable like a cumdump of course for the right people I need to be comfortable with them. But feet, armpits, and piss totally turn me on. So I guess you can say I am as dirty and usable like I say to the right guy

Ok, what is the right guy for this action and what are you’re limits if you’re with Mr. Right?

Hehe. that’s a good reason to be on prep. 🙂 Let us talk about the dirty stuff you do. What is for you the attraction of dirty action?

Honestly idk what it is but the smells of sweaty pits and feet get me going, and piss, I just love they way it feels when I piss my undies or get pissed on something about it is so pleasing. Even the taste makes me happy.

If I think back I’ve done my first piss games as I was 8 years old. It was the combination of piss and cling film which have fascinated young MasterMarc. What have been your first dirty experiences?

Can you tell us a little more about this first dirty meeting?

At first I was nervous and definitely we both got pee shy. But after awhile and some foreplay licking each other’s feet smelling and licking each other’s pits and yes dirty underwear. We both starting lies on each other. It’s was so warm and felt amazing. Then I started to suck his cock while he was still peeing it was like nothing I ever done I love it it was amazing the taste was so good. He kept pissing in my mouth like the flood gates opened I swallowed some and thought how amazing this was. After he was done we fucked, and then my mouth once again became his urinal this time drinking it all.

What makes it so special to drink the piss of others?

Does the fact that the society sees piss as something dirty which is something natural but something we normally cache, people just pee normally at hidden places and it is the waste of your body, has any affect to you?

Not really I still pee in hidden places all the time. People may see it as dirty but to me it a dirty that I like. And they don’t have to like it I don’t judge them for it. And they won’t judge unless they knew Haha I do wish pissing in public happened more often though I thing that would be very hot and I would enjoy it so much

Has piss a humiliating effect to you?

In some settings it most definitely is and I like it when I feel that way, like I’m just a toilet for their piss it such a great feeling. And sometimes it’s not and I like it too when it’s more a mutual thing then it’s just plain fun. Witch is also amazing. But when I’m being a used as a urinal I’m just a hole and that makes me so happy it’s like a treat to get his piss like I was a good boy.

Do you like also to be exposed as piss fag in clubs or at parties?

I haven’t yet… I’m working up to that but that is definitely a goal of mine. It be so hot being in the middle of guys using me like a total piss boy. Non stop for hours drinking it, having it soaked my clothes. So many things I want from it. Just to be used it would be probably the best thing ever.

Would you need any other sexual action if you would be attached in a toilet as blindfolded human urinal or would you just be happy with that situation and enjoy it even if you don’t see anything?

I wouldn’t need it but I would definitely want it. I don’t need it cuz in the moment that’s what I’m there for to be used as a toilet nothing else after all I’m a dirty toilet fag in that situation. But I would want it I mean who doesn’t want a nice load or 20 in them it just feels so nice plus after loads means more piss even better!!

Can you tell us a little about some of your hottest piss experiences?

So after my first experience we definitely made it a regular thing for awhile. The second time we got together he wanted to meet me at this park close to his place. We met up and went to the restrooms at the park there he had me get on my knees fully clothed and he pissed on me there then we walked to his house I was soaked felt so good. There in his room I waited for him to come back with some water and he when he came in he started to piss his own pants putting my face in his crotch. Eventually leading to fucking me good and then pissing down my throat. The tired time we hung out he brought a friend to help him use me. His friend pissed down my throat while he piss fucked me it was so amazing I was in heaven. After he piss fucked me and pulled out the piss and cum started to come out and he put my face in it I love it!!

Hehe, you seem to be a real filthy guy. Do you still have other fields of dirty play you’re interested in or you want to try in the future?

I’m still discovering more of my dirty side so as of now I’m open minded to try anything. Idk what it will be but only time will tell. Definitely gonna be a dirty boy for life tho. I love every bit of it.

I’ve been wanting to lick up the piss that came out my ass I think that would be hot. Sweaty smelly ass has intrigued me but nothing else as of now. Maybe it will progress who knows.