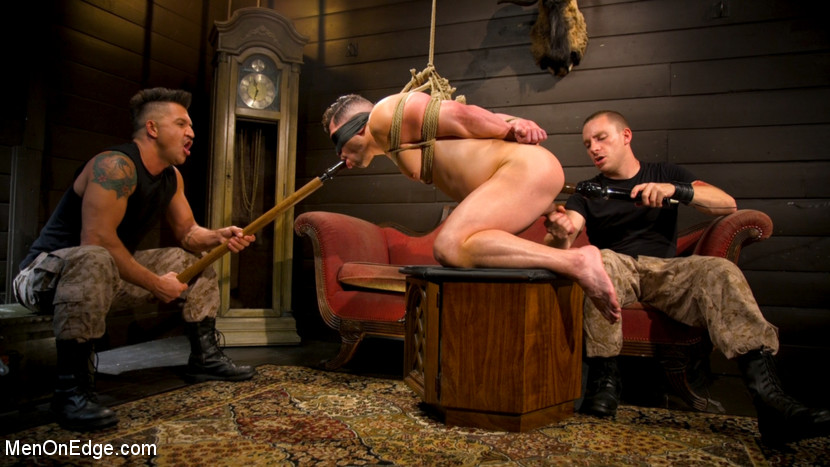 Hi Casper. During the last few weeks different scenes with you have been published by different labels. I know, you’re a real kinkster and you need and love to get used. But what is the special attraction of being the victim IN FRONT OF THE CAMERA?

Casper Ellis: How it is being a “victim” so to say in these movies varies a lot. One thing that makes it most different from time to time is the co-actor. If one submissive so per say meets a guy that is very vanilla it’s not very attractive in my opinion having to lead the way and tell them what to do even though you know they are not that much not into or even like it at all. So if the co-actor seem to enjoy using me or making me the victim in the scene it is often a lot easier to go down in sub-space between the cuts and to shut out surroundings and still do a okey job.

Seems that Casper has been very busy in the last few months as several labels are presenting new scenes with him. But I understand the interest of the labels for this cute Swedish twink as he is a nice guy who you really like to see suffer and being used. 🙂 Another one of the kiky twink is Alex. Let us ask him, why he loves to do what he is doing.

Alex Faux: I think it’s healthy to show vunreablity and I really wanted to start Branding … I’ve stood myself out against the crowd In a world full of e-boys and guys doing the same only fans stuff …

Oh not bad. Even piss is again part of the game. 🙂 I know it is something Yoshi likes too. Hi Yoshi. I’ve also to ask you first about your personal attraction of being used in front of the camera?

Yoshi Kawasaki: This, to me, comes from my exhibitionist nature. Having a camera filming me getting used allows me to feel like a community slut by not only those who are actually using me, but also those who watch me being used through the camera.

Besides, I simply love watching myself getting fucked over and over again haha.

Oh yes, that’s Yoshi as we know him. His ass is the most important for him. 🙂 And so it is for Axel Abysse. Here the two new scenes he has published:

I know we have a lot of spanking fans reading our magazine. Here Some hot spanking scenes out of the archives. Btw. soon we will present you harder corporal punishment scenes here on sadOsam.

Fisters don’t have any erogenous zone at their arms. So why is it hot for them?

I like to learn not to teach! That’s why I love daddies.