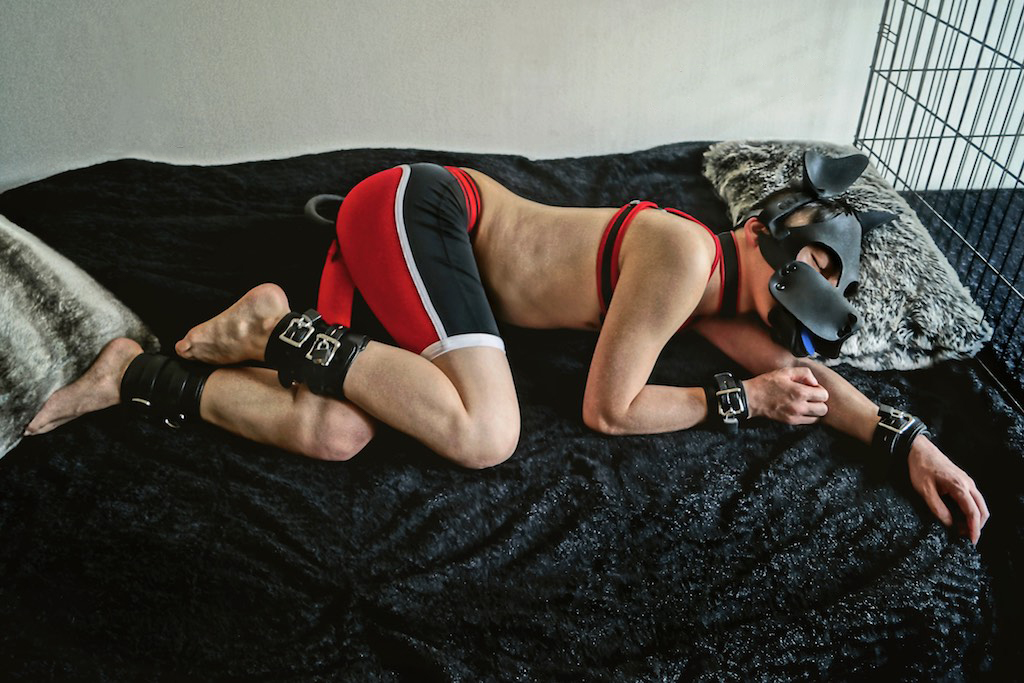 
At the end of the day, we are all just goofy puppies having a good time.

In your mind, what would be your dog race?

In my mind, my race of dog is a Japanese Raccoon Dog, or better known as Tanuki. Small, caring, energetic, friendly yet shy at first, fiercely loyal would be the best way to describe my race in my eyes. My love for dogs and raccoons was the literal reason behind my decision so why not choose a combination of the two hahaha.

How did you start out as pup? What was your first time really pupping out?

I honestly first got into pup play when i first started talking to Pup Nano over Recon. Got my hood from MR S shortly after that but didn’t officially wear it till i moved to Minneapolis 3 year ago. I remember putting it on and at first feeling so silly yet it felt so right. Suddenly all my “insecurities” melted away and i was carefree, could be as silly as i wanted. A weight lifted from my shoulders and my mind was at ease. I could bark like a dog, chew on a rope toy and it just felt normal.

What is pup play for you and how do you live it?

Pup play for me is a number of things, ranging from being one of my most beloved kinks/ fetishes to being a lifestyle where i can express myself as much as i want.I mainly live it out at home in the bedroom with my roommate, Pup Nano, in the form of small scenes or generic silliness. Then there’s pup night at the DC Eagle where i can let loose among fellow pups/ handlers.I’m a solo puppy for now, collared currently to myself until i find the right Handler/ Master or Alpha. Though i long to belong to a pack a pack again or have a handler of my own, i know i still have to work on myself before that happens.

What’s important to you when pupping?

What is important to me when i’m pupping out is having fun while making new friends and connecting with people. I love meeting new people and connecting with them, whether it be just talking with them about their experiences to moshing with them. Also making sure that the play environment is safe and welcoming because i know what it is like to be the new pup at a gather or mosh. It can be intimidating and off putting at first but at the end of the day, we are all just goofy puppies having a good time.

What makes you wag your tail?

Being told i’m a good boy, being tied up nice and tight with a nice gag, getting pets or scritches, sniffing pits for the musk, having my bone stroked or played with, making puppy noises (i’ve gotten really good at that due to me making them in my free time),sucking bones or cocks and seeing other puppies being silly.

Describe your perfect day as pup:

My ideal day as a pup would be to awaken to the musk of an Alphas pits, my tail plug in so i can wag happily. Then be told by a stern command to worship the Alpha pup’s cock, their paw on the back of my head encouraging me to go further down. Then they give me scritches behind my ear and tell me that i’m a good boy or pup. Then they would hook my leash onto my collar, taking me on a walk and showing me off, letting me enjoy the world as a “free” pup.Then when i get home, they bring me back and tie me up tight, edging my puppy bone and making me whimper with glee. Getting me to the edge again and again till they finally let me shoot my puppy load all over myself, then they release their load all over me. After we clean me off, we cuddle and enjoy each other’s company for the rest of the day.