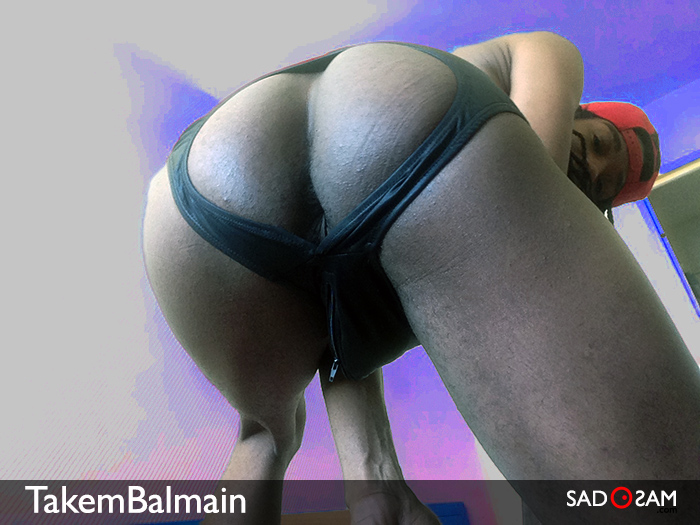 I love this facette of my being, this feminine side of mine. The nylons and string are actually only a part of it, one which is visible.

sadOsam: How long have you already been living out your kinky side and how did you came to that?

TakemBalmain:  Well I gotta say that I love my way of living my sexuality and I love the sex. I love hot fucking. Since not that long ago I mostly earn my living with it. After my back-then boyfriend broke up with me and I moved to Paris, sex became a central point of my life.  Ok, first I hid away for six months and hoped for him to come back to me. Yes, when I’m in a relationship, I go all in. Then there’s no pace for games, it’s honesty and faithfullness. But sadly, he didn’t come back anymore.

So I started chatting with other guys, to date them etc. It was a real sexual liberation. Over time I also started to work as an escort. One reason being financial reasons, yes, but also I have to say I loved being a bitch. I probably have a disposition for nymphomania. I need it every day that god gives me to be bred like a bitch. My asspussy has a real insatiable longing for it.

sadOsam: Whats especially important for you there?

TakemBalmain: In a sexual environment it is openness, honesty, and sincerity. That’s a little like with love, just timely restricted. I got to admit that since my ex I didn’t have a boyfriend anymore, but had changing and successive  fuck-relationships. There I always try to be honest with my sexual partners, which prevents complications and sexually transmittable diseases. After all its about hot sex and getting off! 🙂

sadOsam: Do you have special sexual and fetish preferences?

TakemBalmain: I’m a bottom. I always have been and always knew it. Sure I can be a top, but that’s anything else than what I really love. Though when I’m top, then I really breed that little asspussy and mouthhole troughly 😉

I like travesty and like to wear womens clothing. I also like to be taken in them. Since I’m quite androgyne, it also looks quite good on me. I love this facette of my being, this feminine side of mine. And as there are more than enough men who also love a sexy ass like mine I was able to live out and discover this side of mine more and more. The nylons and string are actually only a part of it, one which is visible.

Furthermore, in sex I’m quite open. I love it when I feel I’m used. I love to be dominated. I want to be there to satisfy my partner. But one cannot mistake that urge for dominance with sadomasochism. Those are two completely different things. I do like those unequal relationships between Masters and slaves, Handlers and dogs.

If it’s about fucking, then I like it bare. It’s just so much hotter than with rubber, You feel your partner a lot better. And I love to take sperm, especially in my ass. But everything of that isn’t a must, just to be clear 😉

To complete my answer I most likely have to say that I used to be bisexual. Yes, I fucked with women 😉 I even went out with them. Believe me, my mother used to be extremely happy about it. Though later less. lol

TakemBalmain: Maybe you’ll think now that I’m desperately horny 🙂 But I’ll take everyone, be it black or white or anything. Ok one big plus I’ll give arabs, but I also take asians, though there aren’t that many here in france. I look after my looks, but the ones of the others aren’t that important to me. They can be big or small, muscular or chunky, young or young adults or older, though I have to say not toooo old. I like manly dominant guys who know what they want. As I said, passive guys like me aren’t my thing, but if I am topping, I like them to be good bitches 😉

sadOsam: What was your hottest experience until now?