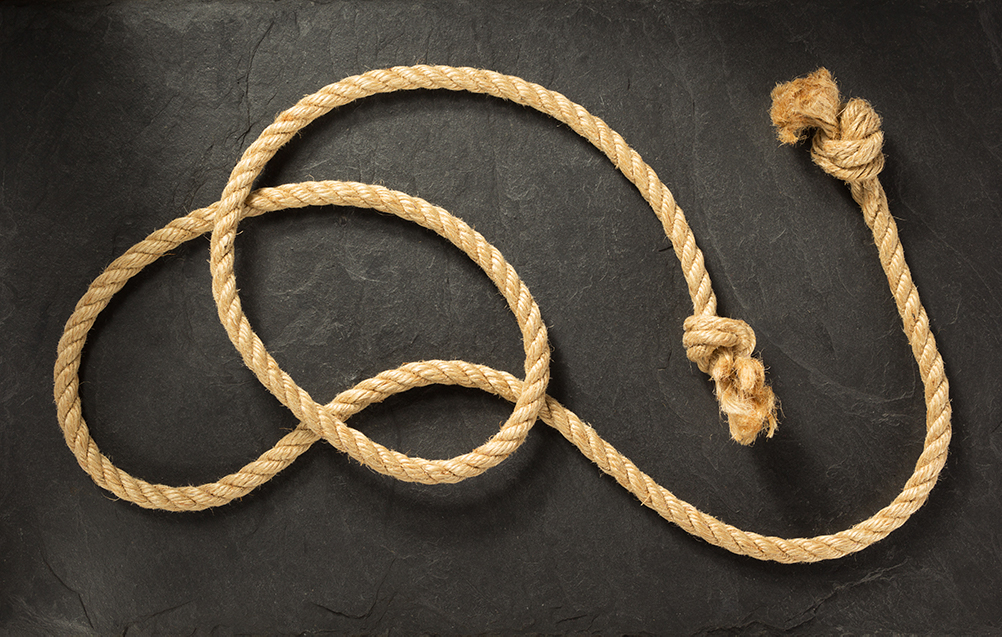 When I ran a rope making business I spent a lot of time experimenting to get good, consistent results. I considered the final recipe a bit of a company secret, but as that’s all in the past I thought I’d type up my process in case it’s of any use. I think that hand-making your own rope is exceptionally rewarding and frankly not too hard (at least in small batches) but everyone has their own way of doing it, so play around with the steps and times to suit yourself.

The basic process is:

Firstly you’ll need to get hold of some good quality raw rope, either hemp or jute. It starts out by having the plant fibres stripped then twisted together to form yarn, then string and finally twisted together to form rope. The most common types are formed of three strands. Be careful as to your source – Chinese hemp usually has its fibres extracted using chemical rather than mechanical processes resulting in a very bleached, stiff and spikey product (not to mention the fact you’d rather not have peroxide residue next to your skin). I always found the best stuff came from Romania.

If you buy raw, untreated hemp (or jute) rope it’ll probably be fairly stiff and prickly. It’ll also stink of a cow’s backside. The aim is to end up with something that has just the right amount of fuzz (friction is used rather than knots on the whole) and also has a wonderful grassy smell that can trigger sub space. Some people don’t think it necessary to boil, but it probably depends on the material you have.

You now need to remove the large prickles and sticky-out fibres. For this there are two schools of thought: burning and pulling. Personally I like a combination of the two, but it’ll depend on your starting material.

This is a bit of a black art and you’d be well advised to experiment on small pieces and read around, but that’s part of the fun. You’re going to need a fibre reactive dye; Procion MX works nicely which you can get from Dharma (US) or Kemtex (UK). As well as the dye you require a big tub with lots of room for the rope to move about in easily without touching, salt (non-iodised table salt is fine) and soda ash for the fixative. You will need the dry weight of the rope to calculate the amount of dye powder required and from that you can work out water volume, salt and soda ash masses.

There are plenty of pages on the process but it’s relatively straightforward. I use warm (not hot) water to improve the reaction speed and leave the rope to soak in the dye mixture for an hour, stirring every 15 minutes. Add the fixative soda ash over 15 minutes then leave for another hour, stirring frequently. Adding literally a drop of synthrapol can help reduce the surface tension and give a more even finish. Don’t let the rope touch itself in the tub or you’ll end up with stripes.

The rope will catch a lot of dye particles so cleaning it thoroughly is vital with several washes of hot water and synthrapol. I use a load of running water followed by a couple of overnight soaks to get the last of it out – reds seem particularly bad.

You need to make sure that the rope is stretched back to it’s normal length – you don’t want your subbie wriggling free! To do this I leave the rope to dry hanging from the top of house down the stairwell after dyeing, adding a lot of chains and weights onto the end.

Once it’s dry and stretched (you can also pull it through a carabiner) then cut it to length and finish the ends with either a regular overhand knot, a wall knot or by whipping the ends. The latter is my favourite as it means there isn’t an annoying knot pressing on you, but I know other people prefer wall knots as it makes it easier to join lengths together.

If you are going to whip the ends, look up the “palm and needle” technique which gives a really secure and very pretty finish. You’ll need a sailmaker’s needle, a palm and whipping twine (I use No 4 sized waxed polypropylene). I might do a whipping tutorial if there’s demand for it.

Once you have your length with the ends finished you need to oil it. This will vary by taste but a good start will be jojoba oil which is readily available or tsubaki oil. Put some oil onto a rag then run the rope through the rag a couple of times and let capillary action draw the oil in.

Done! Now you can let your sub dangeling from it! Have fun!

Loki is a top with a passion for rubber and rope. And you can see more of his stuff on his website, twitter and tumblr!