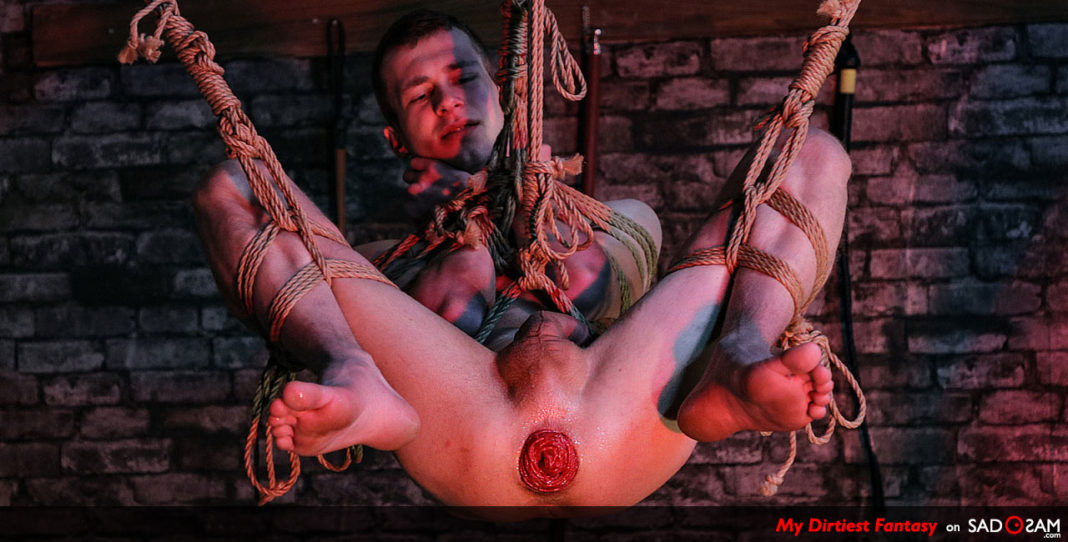 I think we should really ask the guys about their experiences.

I like it a lot, and there will be more good shibari and bondage films. I like to do more video’s where you see the step by step process. Of the bondage and play. And more crazy bondage where I test my skills and the indurense of the model. Upcoming is a video where pup Davey is hanging outside down. And I control a fucking machine.

Ok sounds as The Puppeteer has really had fun with Davey. Now we have also to ask how it was for The Puppeteer’s “victim”. Hi Davey. How was it to get a real rope suspension and to be used in this situation?

It was soo exciting! And it really did turn me on 😉 some ties were quite painful/stressful though! It sure is not easy to be hanging like that.

I know you really love to show you to people in a vulnerable and exposing situations. I think the pic of you alone hanging in the ropes and showing your rosebud is one of your best exposing pics ever. What do you think about the pic?

Super hot! It is slightly humiliating, it shows how talented my hole is, my face too, and the bondage is AMAZING! It’s a great package all in one photo

Two other current scenes we can recommend is a edging and ass play scene with the two cuties Rubberax and Daniel Karrington and for the lovers of scally boys a softer scene with Clyde Walton and Master Aaron.

From KINK MEN we can present you this time four scenes. I’ve to say I love most the new Bound Gods scene “Face Your Fears” in which the Sebastian Keys has a hard session with the two slaves Sherman Maus and Tony Orlando. Motorbike lovers will enjoy how hard the rider Michael Roman can treat his Slave Dillion Diaz. Men On Edge presents also to interesting edging scens. 🙂 Ejaculations can be painful … do you don’t think so?

Hi Sebastian. Looking on the new scenes of KinkMen.com it seems that you’ve been very busy in the last few months … in front and behind the camera. :)) But it seems it has also been fun. The scene you have had to dominate Sherman and Tony looks great. How was it for you as dom?

What is for you a great sm scene, what does it have to have to be one of the scenes you really like?

If you enjoy twinks in kinky action you really have to see the current scene of Boynapped. The two gorgeous twinks Daniel Hausser and Alex Faux get a good treatement by resident top Sean Taylor. I can imagine many of the tops watching it would love to change positon with Sean.

Hi Sean. You’re really a lucky guy. In one of our interviews on sadOsam you’ve told us, that you have one of the best jobs. I think the last scene with Daniel and Alex was one of these moments again. How was it to film with the guys and can you tell us some dirty secrets they have?

Hey! Yes haha I would definitely say I have one of the best jobs in the world! Getting to tie up and play with all those cute twinks just comes naturally to me 😉

Working with Daniel was amazing! Such a tight peachy ass and he really knows how to suck a cock. What made this scene even better was sharing him with hottie Alex!

It’s one of Alex’s first Dom scenes on the site which makes the whole thing that bit extra special. I still got to show who the real Dom is though, taking control and even fucking Alex in the final part. They were both amazing to work with!

A dirty secret? Hmm.. well, during that scene I took a picture off camera while we were having a break. It’s of him suckling my cock! The picture was a recreation of one taken exactly 1 year before during one of Alex’s first scenes 😝 might have to make it a yearly tradition 😜

In other interesting scenes you can see for example Xavier Sibleck fucking Joey Valentine in a very energy-sapping position and a classical corporal punishment scene with Sebastian Kane and the blondie Cain Fonda in his first scene.

I am living the dream, indeed !  It’s somehow overwhelming to think I might also inspire others to embrace their fantasies. I read many comments and messages in that sense, and it’s a real treat. So much love…

On the other hands, hunting for new talented fisters and kinsters isn’t easy. I produce everything myself, look for talents, locations, cameramen, … and too often, the guy just doesn’t show up. Only these few times, it feels like hazardous work and I wonder what I’ve done wrong. I’m still learning the ropes.

However, when the guys actually show up, it’s an immediate explosion. In my brain, in my nerves and finally in my hole. That emotion. When I realise my actual life purpose is about making those situations come true. When I understand this person, at this very moment, is deep inside my guts because we both want it, leading to an orgasm that will reflect on more people than I will ever be able to count. When this chaos within me slowly reconnects all the dots in pure joy. Again yesterday, I came with an arm inside me. I was pissing myself without being able to stop and I suddenly burst in laughters and spasms. It took me somewhere else for a second. The natural high.

Also, I’m a terrible actor, I couldn’t fake that. So I would say my pornography is about capturing those things I have such a hard time describing with words… And I am extremely grateful being able to share it to an audience that understands it. It connects us beyond spoken languages.

Yes indeed, you’re doing a great job Axel. Let us check out what kind of scenes you’ve released in the last few weeks.

And just because I really love this pic, here again in big. …. Have a great Wankday!

Fisters don’t have any erogenous zone at their arms. So why is it hot for them?

I like to learn not to teach! That’s why I love daddies.