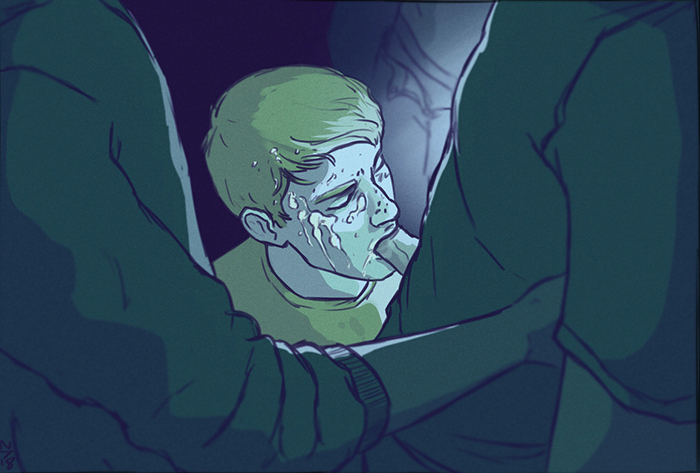 My productivity with drawing actually goes up quite a lot when I’m locked, one of its many perks.

Hi Nicky, I’ve to say I really love your illustrations. You have the talent to get with your sketches to the heart of several kinks. It seems that you know exactly about the feelings the boys on your pictures are enjoying or suffering … or is that the same? Let us talk about your needs and desires. What are you into?

Thanks! I have a lot of interest in BDSM. I love the power exchange, humiliation, degradation, objectification. Many facets of control (or rather lack of). I’m a submissive, a pup, and am locked in chastity most of the time. My productivity with drawing actually goes up quite a lot when I’m locked, one of its many perks. I should probably channel it into making art more often. Also bondage and a ton of other stuff. I find my interests are always expanding, as I think they do with many experimental kinksters. Like, you see a kink on Tumblr or somewhere else over and over, and you get more and more interested until one day you realise you’re into it. 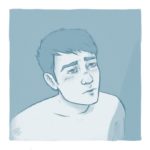 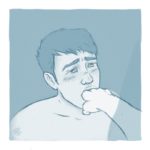 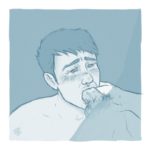 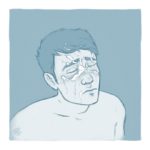 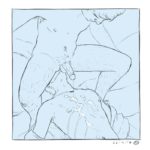 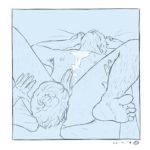 A complete lack of control sparks really intense emotions and arousal for me.

I personally love being forced, so I guess that shows up a lot in stuff I draw because of that. I think relinquishing power is very hot, and having it forcibly taken or to be denied control is a very powerful process. A complete lack of control sparks really intense emotions and arousal for me. Even if its something as simple as a forced blowjob, the lack of control is still there. Also, it’s a little challenging, and fun to draw too. Setting the task of capturing the look on a boys face as he has a dick rammed in his mouth (or different looks throughout the scene, as I have drawn once) is a really fun process. I’m slowly improving with drawing, and I try to capture emotion well so it’s represented accurately, so the person looking at the drawing can hopefully understand what the boy is experiencing.

As I have told you, it is something people can feel if they look at your drawings. And for me it was clear, that you personally love to be forced as much as you love to get punished. Don’t you?

After having disappointed a Dom a Punishment makes you feel better.

You are correct, yes. Well, maybe not being actually punished. I’d hate to disappoint a dom, I would feel so awful. Though in that regard a punishment kind of makes one feel better about their wrongdoings I feel. However yes, punishment for the sake of punishment, I am very much on board. A dom hurting, abusing, humiliating and degrading me just because he wants to, finds it fun, or for his own entertainment/amusement? Sign me up!

Hehe, don’t say that or you will get a waiting list of doms who are looking for their amusement. 🙂 Btw. what kind of new art projects are you planning and where can people find your artwork?

A boy would be so lucky haha. I have a lot of art coming, I have a portrait of a master and some subservient boys that’s almost done. Also I have waiting to paint the next poster in a series I’ve planned, the first one was “Good Boys Swallow” which I did a while back. That one ended up being quite modern looking though, I sorta changed theme toward the end. But now I’m going back to my original intended theme which was sort of like propaganda posters. Next up is “Good Boys Stay Locked” with a cheerful locked boy. Also maybe in the series some product ads, fantasy ones of course, like a miracle formula to stop ejaculation or prevent erections, a wonderful milking machine, that sort of thing. Additionally advertisements for things like boys for use and the like. I also have some quick stuff like I just sketched out a “locker room urinal” scene I’ll post soon. That’s just what’s underway right now, I have a whole growing list of ideas I’m excited to get to! Time is my enemy for sure.

I post all my art to my Tumblr . Also I have gotten requests for prints, so I just made those available on society6 . And made some bonus stuff too in case anyone wanted, which I am finding super fun! It would be weird to post a mug on my Tumblr, but it’s fine to do it there haha.

You’re doing a great work and I hope that we can see much more of your illustrations in the future and that you’ll present them on KINKFINTY too. Last short question – short answer: Are you a good boy?

Then shut-up and swallow!