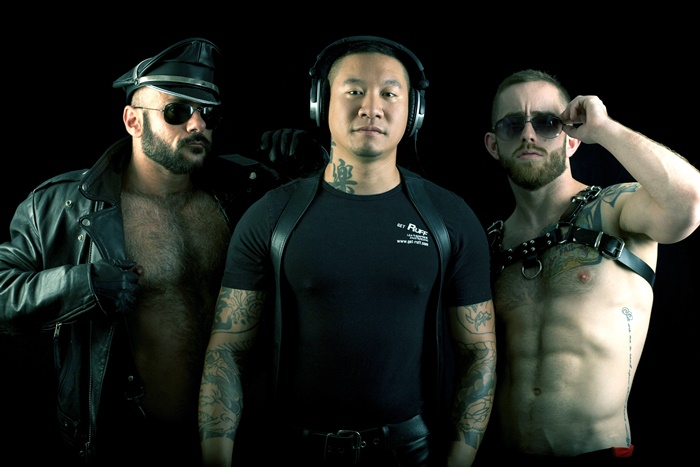 MasterMarc: Hi Jack. You’re one of the fetish DJs who don’t really need to be introduced as you have played at many fetish parties all over. But for the few guys who doesn’t know you, how would you introduce yourself?

Jack Chang: I would introduce myself as a DJ / Remixer / Producer who has been touring internationally for 13 years, with over 21 years professional experience. You are correct, I have played at every major fetish event in Europe, from Hustlaballs in London, Berlin, New York City and Las Vegas, Recon sponsored events such as London Fetish Week (Full Fetish), BEEF in Tel-Aviv, and Into The Tank as well as MADBEAR weekend in Madrid, but what I am most known for in Europe is PiG Berlin, the closing party of Folsom Europe. For six years (2003-2008) I would play the closing set from 3am to 8am, a five-hour set. These days I am focusing more on the US fetish dance scene, and continue to work at Mid-Atlantic Leather weekend in Washington DC, International Mr Leather (IML) weekend in Chicago, as well as the original Folsom Street Fair in San Francisco, having performed there now three times. I am humbled to say that my work has been recognized by public vote and I was awarded best DJ 2013 and 2016 in the X-Awards. Now also my name has crossed into the mainstream gay scene and I perform at circuit parties all over the world, but I am still known as the King of the Fuck Parties. I like the title!

MasterMarc: “King of the Fuck Parties” sounds great. 🙂 It seems that you are a real fucker at the turntables. 🙂 What is for you a good fetish party? What does it has to have?

Jack Chang: I was once told by a friend close to me that the reason he thinks my music works so well is that I am not just a regular dance DJ coming to play at a fetish party. I’m part of that community myself. This is not compulsory for every DJ that plays in the fetish scene, but it certainly helps. I doubt many “regular” DJs would understand what makes good fetish dance music if they have not been to these parties themselves as part of the community itself.

What does a good fetish party need to have to be a good party? It’s hard to describe. There are some fetish dance parties such as BlacKKnighT in Montreal, Canada, and BEEF in Tel-Aviv, as well as of course HardOn in London, who I have had the pleasure of working with for a number of years, that have always kept to a strict dress code (rubber, leather, uniform, and more recently neoprene as well as wrestling singlets and sportsgear. Fetish parties in my view are an escape, a window to another world, where everyone dresses up to adhere to the dress code. I believe this is important. You cannot have casually dressed people in a fetish party. It takes away from the escapism of greeting a room full of people dressed in ways that they do not normally otherwise in regular clubs, or on the street. That makes the atmosphere more special, more different from normal life.

MasterMarc: But there have to be more than just the cloths. Because the way you tell it it sounds a little like carneval. Which ambiance have the organizer and the DJs to create, so that it becomes a great party?

Jack Chang: I guess I did make it sound like a bit of a costume festival. J In general, my experience with organizers who have done well with their fetish events have focused more not on the stage production, people are not coming to see a show on stage, but the focus is to pay more attention to appropriate lighting. Keeping light levels lower takes the focus off the venue and the stage and more onto the dancefloor itself. DJs should create music appropriate to the event. People come to feel different, to see people dressed different, and the music should also follow. The less commercial, the better, in most cases.

MasterMarc: You’ve told us, that you’re part of the fetish community. I am very curious now and I have to ask you, what have been your first steps into the fetish world and whate are you into?

I’m very open minded and easy going. To give you more details would be too much information for some of my fans to handle I think.

Jack Chang: I think you misunderstand my previous answer. It is because I worked in this environment that started my interest in the first place, and it is part of who I am, and I am proud of it. I think all sexual activity (all good sexual activity that connects well) requires concentration of one type of another. For fisting, actually there is quite a large variety of music that people use, simply because everyone is different, comes from different backgrounds, and have different personalities, and therefore prefer different types of music to enjoy this activity with someone. I usually hear these days techno or trance, but on occasion I have heard classical music, and on one occasion, opera.

MasterMarc: Of course everyone is different and I can totaly understand that classical music can fit to kinky action too. But at parties it is the DJ who is setting the sound also for the action in the dark rooms. Could you propably show us one of your sets you have played at a fist party and tell us, why you think that it is good music for action in the slings?

Jack Chang: This is the most suitable recording for fist. Deep, masculine sound. Minimal female vocals as I don’t really want to have a woman in my head while I have a man in my ass. 😉

Jack Chang: There aren’t any real differences. The feeling should be the same, sexual and masculine.

MasterMarc: If a newbie DJ is asking you, what kind of music he should play at a fetish party and how good music for such events has to be, what would you answer him?

Jack Chang: The first thing I would ask a newbie DJ to play at a fetish party is first of all to join the event! You cannot expect to begin to understand what is required for you in terms of music if you do not join the dancefloor and visit the dungeon and playroom area. You do not have to participate, but try to read the atmosphere. In men-only events where there is a darkroom, playroom or dungeon, try to understand the atmosphere is a very sexual, masculine atmosphere (for gay events at least).

In my view, commercial music has no place in a fetish party. I would ask the newbie DJ to spend time in the dungeon and see if pop music fits. Do you want a Top 40 Chart diva in your ear while you are having sex with another man?

The atmosphere in these events is usually very underground, and you would expect to see things happening that would not happen in normal nightclubs. The music should reflect this. Make the people feel they are entering somewhere different, special, and sexual.

MasterMarc: That sounds like good advices. I’m sure as DJ you like also to go out for parties. What kind of parties do you visit as guest and do you have any DJs you love to have on stage?

Jack Chang: Sadly I do not have time to just visit for fun any more. L If I am not traveling and I am free at the weekend, I have a remix and studio schedule to maintain. I love listening to DJs from all over the world. You can hear how different they can be, and how the best ones can bring out their character in their sounds.

MasterMarc:  It was a pleasure to talk to you, Jack. I am sure we will see us again at one of the fetish parties you’re heating us up with your beats soon.