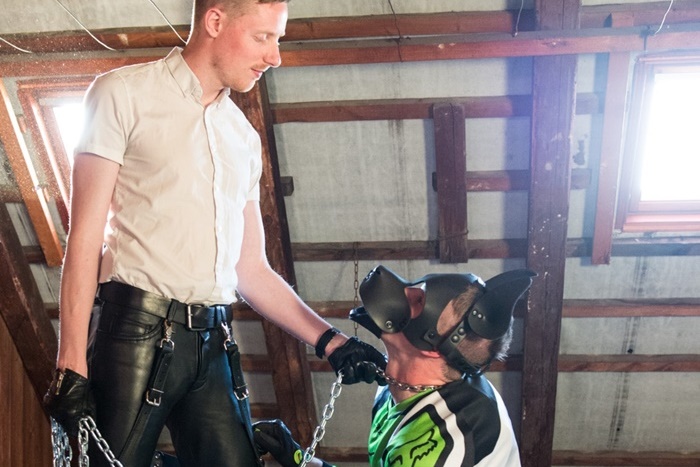 A talk with Jason a top who is exploring his duties and pleasure as HANDLER.

MasterMarc: Hi Jason, it’s great to have you here with us. You’re a sexy Danish guy who tries to don’t lose controle about such wild puppies like Oakleigh. Before we talk about this hard work as top and handler we would be interested to know more about you and how you have found your way into the kinky world. When have you realized that you’re into fetish and how have you started to live it?

Jason: Thanks for having me. Oakleigh would tell you that he is the most obedient puppy and has the trophy to prove it.

Kink has been in my life ever since I came out right before turning sixteen – for a time I actually thought that all gay people tied their boyfriends up. This was how I was introduced to kink: tying my boyfriend to a broomstick using an electrical extension chord. While my boyfriend was the one always coming up with new ideas for what I could do to him I knew that I had found the thing that turned me on the most: control.

MasterMarc: I understand you totally. Controle is really a turn on for people like us. Can you tell us, what your next steps have been?

I ended up giving in to my urges way too often. Too much want and too little control. it took me to a bad place in my life – that’s when I met my owner. To make a long story short he took me in and gave me the formal training I needed to understand myself, my kinks and the bigger picture.

I spent a bit over four years with him before he felt I was ready to strike out on my own. I am very grateful for the things he taught me and I always try to incorporate his lessons into my own work with the subs I engage with.

MasterMarc: What would you say are you into and how has it changed during the last years?

MasterMarc: Can you tell us, what the differeces between a Top or Master and a Handler are? And why is it such a challenge to become a handler?

Jason: I think one of the big challenges in kink is being able to speak the same language as the people you engage with. Words such as “Master”, “Top” and “Handler” can have very different meanings depending on a persons outlook and what kink culture he was raised in. When dealing with people internationally the language itself may also present a challenge.

As for myself I have always regarded the word “Master” as a deeply personal thing – to me meaning “the one I dedicate myself and submit to”. It was what I called my owner when I was with him and ever since the word has carried a heavy weight for me.

“Handler” has come to mean something along the lines of “caretaker” for me. My pups are generally very respectful to me – but they also run free and then return to me when they need guidance or a safe place. As such the level of direct control varies between none at all and me having a tight hold on their leash. I don’t think it is specifically difficult to become a handler – it’s simply that it’s different and like any new skill you have to put in the work to master it.

MasterMarc: Which skills does a good handler need?

Jason: As I have said the thing I’ve needed the most is patience – which I’m not always good at. On more than one occasion of a pup being cheeky or less disciplined I’ve found myself overreacting.

Coming more into contact with the pup cominuty also has taught me that pups are very diverse. Some crave heavy SM handling and being forced to behave like dogs, some use pupspace as a fun getaway and so on. The most important skill – and one you need when engaging in all kink – is communication. Learning what your puppy needs and what you – yourself – need as a handler.

MasterMarc: There aren’t really standards in fetish and sm so the diversity is part of it. What makes it interesting for you to become also a handler and to work on your skills as handler?

Besides that – on a more personal level – my connection with Oakleigh and Teck is what drives me forward. I did not set out with the goal of becoming a handler and then found a pup to match. I met these two amazing puppies and because I love them and want to be the best I can be for them I will learn to be their handler.

MasterMarc: The personal connection is very important and the best motivation. Can you tell us, how you learn to be a good handler? Do you have a coach, are your pups educating you or is it a combination out of it?

Jason: I certainly look at what others do. I prefer situations where learning is an exchange. Where I can benefit from someone’s experience and give back from mine.  My pups teach me a lot just by being themselves. It is – again – an exchange. I’m sure my preferences and way of doing things affect them as well.

Just tonight I had a very rewarding talk with Teck where he expressed some desires which were a lot more of the “boy” than “pup” variety. I have set a goal for me to take one or both of my pups to a full on puppy event as their handler. Something I’ve so far been reluctant to do. I think that will be the next phase of my growth.

MasterMarc: Konfucius would say that “the journey is the destination”. And it seems that you’re really enjoying your journey and that you get rewarded for your commitment to your pups/boys. I wish you all the best for the future and I hope, you keep us informed about your puppy world journey.