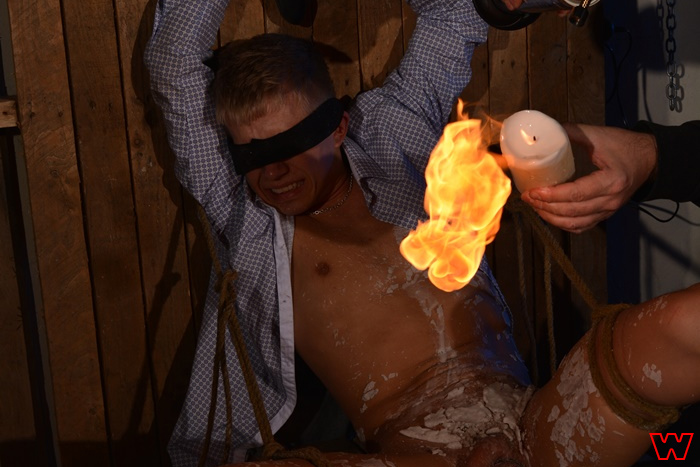 Have you heard about the new movie of Boynapped which is harder and darker as the other scenes of that label? We have talked to Manic Dante, the director of the movie, and to Chris Jansen, which is really suffering, more than ever, in this movie. You can watch how the cute Danish gets tortured and used.

Hi Manic Dante. Between Christmas and New Year, BoyNapped is releasing three Scenes with Chris Jansen. Bound By Debt is the new movie you have realized as director. The trailer you’ve published looks different to other BoyNapped productions. Can you tell us a little about your new movie?

Manic Dante: Hey. Yes we went a different path with this movie than we normally do. The story was not originally written for BoyNapped, It was intended as a stand alone DVD. However after writing began and plans for the production came together it was discussed that the BoyNapped members might enjoy this different take on kink and a fetish film with a storyline. The story itself isn’t a complex one, but does draw the viewer in and maybe even raise an eyebrow. After being sent to an old warehouse, Chris Jansen is told that his parents are in serious debt. However they have been offered a way out, at the price of their son. Who must endure torment and torture in order to earn the money to clear his parents debt. There is a few differences in production between this new movie and our usual. Technical aspects such as the lighting style, which we made more dark eerie. The filming style and camera angles, which I filmed very direct and straight on, to try put the viewer in a place of confrontation while watching. From these points to the kink itself, which I feel flows from one kink to the next. We were very fortunate to have a model such as Chris who was willing to push his own boundaries and work with us to explore a level we wouldn’t normally reach. The action in this movie transcends the average BoyNapped film, and I’m very excited to see how members react to it.

This is the first time I have actually made a fetish movie with a storyline. The videos on BoyNapped always start with the victim tied in some way, there is no actual story to the video individually. This comes from BoyNapped’s original premise. When it started the site was about picking lads up in a minibus and using them in the back, before either dumping them or taking them home to abuse. Which was the original tagline for the site ” ‘Nap ‘Em & Tap ‘Em “. But we no longer film the first part and focus solely on the abuse afterwards. This was because there was a greater demand for the abuse than there was for the original pick ups, as you say, people want action. Knowing this we worked this new movie to have a storyline, without overpowering the action. We get the point across quickly at the beginning of the movie then its an hour an 40 minutes of straight abusive action, before a little bit of a closing at the end. I think we got a good balance between the two aspects.

Would you say that the action in this movie is comparable with other BoyNapped movies or is it harder, softer?

I think it’s harder than a lot of our videos. We have had some models that have taken a lot from us, I currently have a couple in post production where the models take one hell of a beating. But not a lot of models can take the level Chris Jansen did during this movie. I thought he was outstanding when I filmed him being used as a human punching bag for BoyNapped, But the level he took during this movie, and his acting in it, left me in awe!

Can you tell and show us a little how it looks like on a set when you’re making a movie? What’s the ambiance, how many people are there, how will the models be prepared for the shooting etc.

That’s a difficult one to answer. To begin with it’s very laid back and chilled, chatting while the finishing touches are made to the set and equipment. Then of course it becomes a bit more sadistic after the cameras start rolling. On set for this production was Chris Jansen, our mysterious hooded figure and myself. We have the facilities for Chris to get physically ready; making sure he looks good, hairs done and doing any douching that is needed. For mental preparation, Chris was already sent a scene breakdown before arriving, but after he was ready we sat down to go over some of the finer points, discuss any issues he may have had and ran through his lines. I’ve working with Chris many times and there’s always a laugh to be had before and after filming.

Thank you Manic Dante. It’s great to know what the director is thinking about his new film but now it is really time to ask Chris a little more about the movie.

Hi Chris. Dante told us, that you have really had to suffer for this movie. Is it true?

Chris Jansen: Yes it is true. This movie was really a hard experience for me. More punishment, harder than all the other kinky movies I’ve done. The scenes have been longer than before and at the same time harder. That makes it double or triple as intense as other scenes.

To be blindfolded gives you also the feeling of a real abusive situation because you can’t see anymore the set and the other involved people. You are just in your dark but painful world. That can be very humiliating, emitional and physically hard. Some marks I’ve had for days and they have been painful.

Why was it such emotional for you? And do you like to be treated hard?

If you prepare yourself for such a story you try to go into your role, and I really got into it. And even if you know that the guy who is abusing you is a good guy you can trust in, you still feel the pain he is giving you. That are emotions because I’m not a machine. If a movie looks hard, it is hard. If you would try to play that you’re in pain people would see it, so it is just possible to act like in pain if you are feeling pain.

But to be honest, i like the punishments and also other action we have done in the movie. Electro is for example something which makes me rock hard. 🙂 It is great to feel the electricity playing with my muscles and nerves or the painful heat of hot wax droping on my skin.

It seems that you are in your element when you’re doing such movies, Chris. Can you tell us a little how it was to work with the production team of this movie?

Yea … you’re right if you say that i was in my element. I felt very comfortable even if the situation and action wasn’t. If you are blindfolded and in a good mood you even loos your sense of time. It was really a great experience and the team was just great. They are caring about the actors. They are respectful and if you need a break or water or you have to heat you up they are helping you as much as they can. It is a team and after work you are enjoying also time togehter. You’re going out for a drink or for dinner … I really love to work with these guys.

If you want to see more details of the movie CLICK HERE.

If you want to see more details of the movie CLICK HERE.