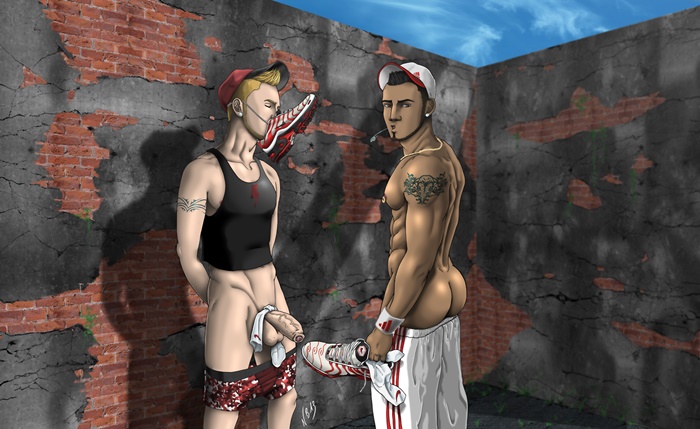 Today we present other two masterpieces of Nicolas Brunet’s kinky art. As you know he is the illustrator of the images which are integrated currently as background or as picture on our section pages.

The first drawing is showing two hot sneaker boys and the second one a kinky guy in lingerie. We hope you enjoy to know a little making of and background information of his pictures. If we hooked you with his pictures go check out the first and second part of this series!

I’ve done several illustrations about sneakers fetish, but this one is the my favorite. Like some others, you can imagine a little story around it. Sneakers are really hard to draw and requires lots of attention. There are lots very code, and when you draw a Nike TN you have to be very careful with the shapes, colors, laces, etc… Each line is important. You can’t just symbolize the shoe, it has to be very realistic, which implies to have a realistic character with it. and it’s exctly the same with cap (I hate to draw caps! lol). I first draw the character on the right, and very quickly the idea of adding a second charcacter came. At first I wanted to show a kind of sub/dom relationship, but fianlly I think it ended like a little sex-game. We are not sure that the guy on the left has his hands tight on the back, the socks as cock-ring is not real proof of submission or BDSM. For the background, it’s a mix of several textures and digital drawing. The look of the right character looking at the viewers can be read in different ways, but envolve the viewer. It can say “What are you doing here” like if the viewer was a voyeur, or “Come and join us”. So what would you choose?

I’ve drawn this one after watching an “Agatha Christies’s Poirot” on TV. (I love Poirot! :p). The idea I had in mind was “what if Poirot was a hero of a gay porn comic?”. This a funny game. There were some obvious props that have to be in it. But it has to be some more to be really fun. A few days before I’ve seen a photo of a muscle guy wearing woman underwear. Usually I didn’t really find it sexy, but to my surprise it caught my eyes. That’s the reason why I tried to add some on this charcter. It’s was a bit risky and a challenge to keep him sexy. But I also like the idea of having fun playing with the point lace texture. I think the harness come after to contrast with it, and give a touch of roughness, as well as the beard.