“Come on, buddy!” Kev grinned. The handsome jock put his hands on his hips and waited. . He was wearing a pair of briefs that could barely hold all that he had to offer. His big, juicy balls and his meaty dick created a rather impressive landscape of mounds in the thin white fabric. Filled to capacity with his impressive genitalia, Kev’s brightly colored briefs almost looked like he had mistakenly put on an old pair of underwear from his early teenage days. The waistband was stretched down by the weight of his fat, meaty balls and his big dick, exposing his trimmed dark pubes.

Kev looked at Ben expectantly. Like Kev, Ben was 20 years old. And like his friend, he had a muscular, tanned body. Both of them worked out on a regular basis, and it showed. Their bodies were sculptured without making them look bulky, with muscles in all the right places.

Ben reached into his boxers. The black haired stud had a cocky grin on his face as he grabbed his junk and pulled it over the waistband, letting his big dick and hefty balls tumble down. His dick was semi-hard and fattening rapidly. His big, round balls hung low in his sack, the left one hanging a bit lower than the right one.

I looked at my assistant Erik and rolled my eyes. We had planned on shooting a simple scene for our website. Kev and Ben were supposed to kick each other in the nuts a couple of times for a promo clip. Somehow, the two jocks had managed to turn this simple task into a vegetable competition.

They were like little farmer boys at the annual village Giant Pumpkin Contest, showing off their fat little buttercup squashes, each of them hoping that their little veggies outclass the competition and take the trophy.

My assistant Erik smiled back at me. “This is gonna be good”, he said with a wink.

“Probably not for Ben”, I chuckled. Kev and Ben had compared their junk a couple of times, and – unless Ben had seen a sudden growth spurt – the results had always been the same: Kev’s dick and balls were bigger than Ben’s, if only by a hairsbreadth.

But Ben was as cocky – and conceited – as ever. And he had put his moneymakers where his mouth was: He had bet his balls – and knowing Kev, he was going to be in a lot of pain soon.

“Here they are”, Ben grinned proudly. His fat cock had risen to a beautiful boner and cast a shadow over his juicy family jewels that were dangling low in his sack. “Check out these monsters. Weep, motherfucker, weep!”

Then he burst out laughing.

“Nice try, little guy”, Kev chuckled. “Why don’t you spread your lights right away so we can get it over with?” He inhaled sharply, grimacing in mock-sympathy. “You’ll be in so much pain, buddy.”

Ben raised his eyebrows and looked down at his junk. He grabbed the tip of his hard dick and got it out of the way, pressing it against his hip so that he could have an unobstructed look at his most valuable possessions. “They are fucking beautiful”, he mumbled. “And they are fucking big.”

Kev grinned. “Do you know those little things my mom takes against her migraine? What are they called again?” He looked at me.

I raised my eyebrows. “You mean globules?”

Kev burst out laughing. “That’s what they are!” He grinned triumphantly, pointing at Ben’s nuts. “Globules!”

Ben stared at them. “That’s not funny”, he mumbled. He looked down at his junk. Slowly but steadily, his erection was withering.

“Come on“, Kev chuckled and patted his buddy on the back. “Just admit it: Your tiny little raisins don’t stand a chance.” He grinned and pulled down his briefs, exposing his massive boner and his big, low-hanging balls. “Spread your legs, buddy.”

Ben’s eyes darted from Kev’s junk to his and back again. Then he looked up and turned to me, his eyes filled with desperation.

I looked at my assistant.

“About what?” Kev said slowly.

“You see”, Erik said, “from where I’m standing Ben’s junk looks pretty decent. Maybe it is bigger than yours.”

Erik smiled and cracked his knuckles. “Let me have a look, alright?”

“Sure!” Ben said. He put his hands behind his back and smiled brightly. His dick was slowly growing hard again.

Kev shrugged. “Alright, why not.”

Erik walked up to the two guys and got down on his knees. “Let’s see”, he mumbled. He grabbed Kev’s and Ben’s balls, making both of them inhale sharply. He weighed the two well-filled sacks in his hands. “It’s a close call…”

Erik started squeezing, digging his fingertips into the tender flesh of Ben’s and Kev’s testicles.

Erik grinned. “Well, I do need to examine them to make an informed decision, right?”

“Right”, Ben said in a strained voice, grimacing in pain.

Kev was gritting his teeth, trying to take it like a man. “Well?”

Erik squeezed harder, making Kev and Ben groan in pain as their nuts were squished in Erik’s hands.

Both Ben’s and Kev’s dicks were rock hard and pointing at the ceiling. Their groans echoed through the room as their balls were viciously squeezed and kneaded by Erik.

Finally, Erik let go, allowing Kev and Ben to double over in pain. Their faces contorted in pain, they nursed their battered balls.

Erik looked up at them, a cheeky grin on his face. “Sorry, Ben”, he chuckled. “Seems like your tiny raisins don’t stand a chance against Kev’s plums…”

Ben let out an annoyed grunt.

“You heard the man”, Kev grinned weakly, rubbing his balls. “Spread your legs so I can kick your little balls in.”

“No buts, buddy”, Kev interrupted him with a grin. “Looks like your little balls got you in trouble again. Now spread your legs and face the consequences.”

Ben gulped. He stood in front of Kev, bare naked, his exposed balls dangling vulnerably below his hard dick.

Kev grinned and brought his leg back. “Let’s see how many kicks it takes to pit your cherries”, he said before smashing his bare foot into Ben’s waiting balls.

Kev’s instep collided with Ben’s naked nuts, ramming them into his body with a dull thud. Ben’s eyes widened and his mouth formed a little “O”, accompanied by a long, wheezing moan.

Kev chuckled and kicked Ben’s balls again with all the force he could muster, flattening them like pancakes and eliciting a pitiful, high-pitched whimper.

Ben’s dick was hard as a rock, its tip glistening with precum.

His body was frozen in agony. His lips were trembling and his nose was twitching.

Kev’s foot slammed into Ben’s crotch once again, smashing his nuts with a resounding splat.

A little spurt of precum splattered out of Ben’s cock, violently forced out of his balls.

The fourth kick found Ben’s waiting balls, smashing them hard and causing him to let out a miserable, high-pitched noise that sounded like a rusty hinge.

Ben’s rock-hard dick was twitching violently, leaking precum that dripped down in a puddle between his feet.

Kev chuckled, pointing at Ben’s balls that were starting to swell and assume a slightly unnatural red color. “You know what? When we’re finished your balls might be bigger than mine…”

Ben let out a wheezing moan.

“Looks like your little cherries have turned into nice, ripe tomatoes”, Kev mused, taking a step back. “Let’s see if we can turn them into ketchup.”

With a running start, Kev brought his foot up between Ben’s thighs. His instep connected perfectly with both of Ben’s balls, smashing them hard and flattening the two meaty orbs into his pelvis.

Ben gasped for air. His eyes filled with tears. His eyebrows rose.

Rope after rope of creamy spunk shot out of Ben’s twitching dick, landing on the floor and all over Kev’s body, on his face and his hair.

One spurt landed right on Kev’s balls before dripping down onto the floor.

“Hey”, Kev yelled with feigned horror. “You hit me in the nuts with your spunk!” He brought his leg back and smashed his foot into Ben’s pulsing, contracting balls.

Ben let out a miserable shriek. His dick continued emptying his swollen, battered balls all over the floor as he curled up in a ball, sobbing and moaning. 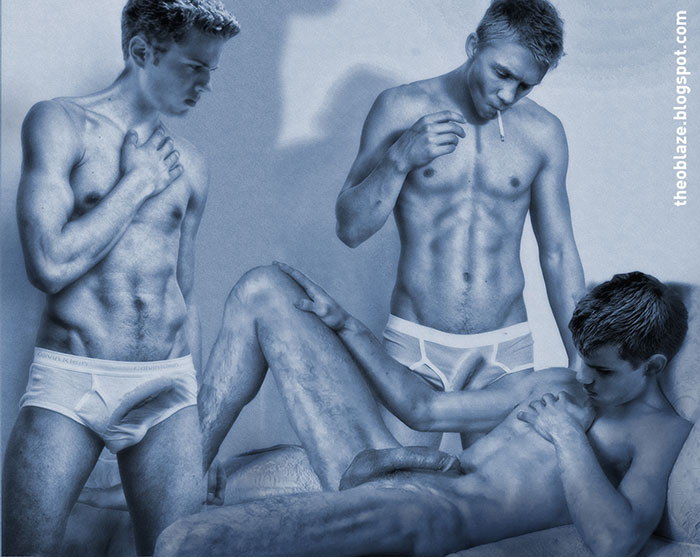