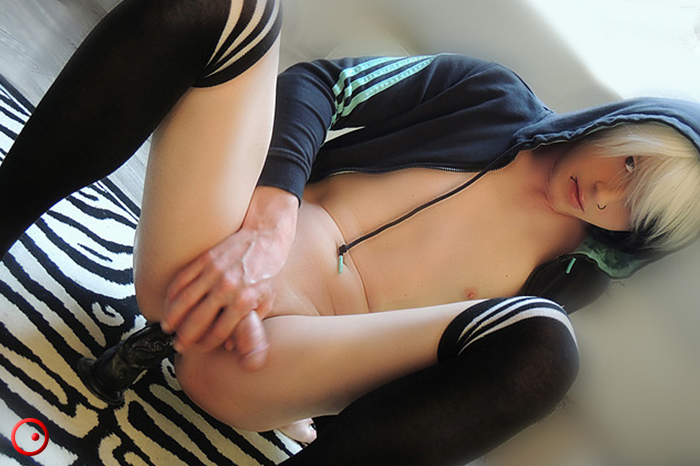 Some people think if you show your cock and your ass publicly, you’re prepared to fuck with everybody.

As may know I have a nylon fetish and a preference for smooth boys. I searched and searched, but I didn’t find something what I like. So I’ve decided to do my own thing. My first video went online for nearly two years ago. It was so unprofessional and one of those vids without showing the face (not online anymore). Nobody was interested in that vid for sure and I reflect how to increase the traffic. I bought a better cam and some spotlights and decided to show my face. Off course I didn’t want that my colleges, friends and family see me wanking for the cam (not as the first view). EBay offers me the solution: I ordered a wig and bought makeup. Even if you were my biggest follower, you would not recognized me if we would sit face to face in the train or something else.

Better vids – more “fans”: I like the kinky comments under my vids from other users. It seems that everybody wants to fuck my cute “boipussy”. I wanted more. I created a Facebook fan page. On the top the fan page had had more than 2k fans and every single one wanted to suck my dick or plug my ass. And yes… I encountered many idiots, too. I remember a femboy sissy from Great Britain who wanted to know how my farts smell. As I told him that I don’t like to smell farts he became aggressive. Although I observe the Facebook policies (no cock, no naked ass), they deleted my first fan page… and the second… and the third. Now I’m not a Facebook user anymore. But it was a great experience and I met many nice boys and also girls. One girl from Essen, Germany has a strong nylon fetish. She wants her boys to wear her sexy lingerie. Something you don’t have to say twice to me =). Unfortunately the most live in UK, USA or Canada.

Well… if Facebook doesn’t want my femboy stuff I’ll find something other: Tumblr and twitter. The best is that I’ve found some professionals on these channels like sadOsam and a platform for nylon foot lovers from Italy. My problem with social media is that there are so many posers. And the most don’t understand, that I’m not searching for love not even for sex. But when I say okay, let’s fuck and stream it in the internet… no response. Some other think if you are a young femboy and CD you’re searching for a “daddy”. No! Sorry, old man! I already have a daddy. That’s the husband of my mother and I don’t want a sexual affair with him or any another “daddy”. A funny group of folks is who don’t understand if you don’t answer private messages. Really… I’ve got messaging histories in which I don’t answer one single message. That’s how the most of them look like:

tigerco****: ich lasse mich mit dir penutzt , mach was du willst , und ich mache alles was du moechtest (You can do what ever you want with me, use me. I do everything what you want)

The language is a kind of (bad) German I think. I speak German, I live in Germany. But this isn’t real German. There are too many messages like these in my inbox. Enough negative stuff. If you have thousands of follower on twitter and Tumblr and over 4k friends on xHamster, there is somebody you can talk with every time and many people I really like. Some hours ago I’ve met a nice guy who lives in the same city where I live, only some miles away. Or a nice girl from cologne who likes girly boys like me. We’re going to chat on Sunday again.

So many kind (and sometimes kinky) acquaintances all over the world from Canada to Israel. The only thing you’ve to do if you want to show you on the www is to sort out idiots and posers. Block them consistently and have fun with the “diamonds”.

I’m Chrissy aka KinkyChrisX. I’m a skinny femboy in the mid-twenties. Wearing girly clothes and teasing dressed up for the cam is my biggest passion. My obsession is once upon a time to make a porn video with my sissy friends, in which one we get pounded by smooth boys. I shave my tiny body and wear sexy lingerie every day, but I don’t want to be a girl. I just love this feeling to be as cute as a young girl. But I do serious thing, too. I like mountain biking and many other sports. I make sport whenever I can to keep my girly body slim. When I don’t do some of this things, I like to draw and paint. Sometimes filthy pictures 😉 In everyday life I’m a marketing assistant who loves his job and the team around him. Some months ago MasterMarc from sadOsam asked me if would like to do an interview and I agreed. That’s how KinkyChris started on sadOsam. Thank you so much and now have fun!