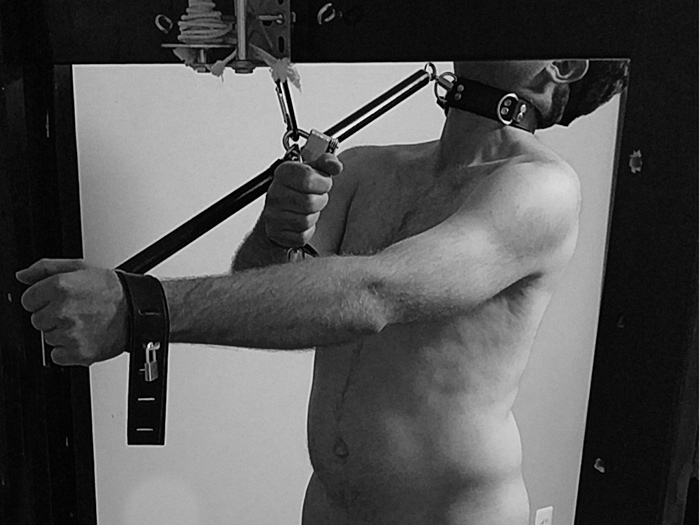 DIY TUTORIAL
15 Different Ways To Use A Spreader Bar

As always, make sure bdsm/kink play is safe, sane, and consensual. Never leave your sub alone during bdsm play. Especially with predicament bondage and punishment bondage, you should always watch your sub closely. You may want to punish him, but you still want him to be there and intact the next day so you can play with him again. Prepare everything needed before restraining your sub so there’s no need to step away until after you’ve released him. When using rope or any tightly fitting cuffs, always periodically feel your sub’s hands/feet/balls (whatever is tied) to ensure they aren’t cold. Cold is a sign of circulation loss which needs to be addressed immediately by removing the restraints in that area before your sub gets hurt.

Specific to these ideas, make sure nothing is poking through or sticking out of your spreader bar. For example, if you have an eyehook screwed through a wooden spreader bar, the sharp pointed end of the eyehook may slightly poke through the other end, and could scratch or poke your sub. To avoid this, give it a turn or so in reverse to pull it back, and to be even safer, wrap that part with electrical tape to make absolutely sure nothing will poke your sub. You may get the urge to “poke” your sub with something while playing, but not sharp objects. 😉

Put your sub in a unique and much simpler hogtie.

Then use a simple latch clip or carabiner clip to connect the eyehooks of the spreader bars together for a quick hogtie position that’s very easy to release, without having to end your session. Your sub will still be restrained and ready for more.

Unlike typical handcuffs, he won’t be able to keep his hands close enough together to allow his arms to protect his pits and ribs. If he’s ticklish, it’s open season!

5. Use a spreader bar as makeshift stocks.

Secure a 2.5 to 3 foot spreader bar to something at a nice height where your sub would be if he is standing up, or kneeling on the floor. Be creative and use things like chairs, and old short/open bookcase, whatever works.

Use things like zip ties or other simple hardware to secure the spreader bar in place. Then tie or cuff your sub’s hands to each end of the spreader bar, and clip your collared sub’s collar to the center eyehook.

If you secured the spreader bar at a low enough height, it’s as if you’ve got him locked in kneeling stocks.

6. You can even get creative and add more to this one, such as adjustable nipple clamps or clover clamps with the connecting chain looped around an anchor point in front to further restrict your sub’s movement.

Or tie his balls and hoist them up a bit from behind, forcing him to stand up and bend over at the waist. Or both, to restrict him to a point in between both positions.

7. Keep your sub in a forced squatting position for a nice forced workout for his quads.

Tie of cuff your sub’s ankles to each end of the spreader bar. Then tie a rope around his balls and run the rope down to the center eyehook in the spreader bar, pulling it taut. Then pull the rope at least a few more inches until your sub is forced to squat down a bit, and tie it off to the eyehook.

Just make sure your sub can’t simply sit or kneel down, by tying/cuffing his hands to a ceiling hook, closet rod, over the top of an interior door, etc.

8. Use it as a makeshift yoke.

Attach one end to your sub’s collar, lock one hand to the middle eyehook, and the other hand to the eyehook at the end. Then you can optionally suspend the spreader bar (from a ceiling hook, closet rod, etc.) to hold it in place at whatever height you want.

9. Use it to keep your sub’s hands behind his back and hoisted up.

Attach one end of the spreader bar to your sub’s collar and the other end to his restrained hands behind his back, then suspend the spreader bar from the ceiling to put him in a nice vulnerable predicament.

10. If you hoist the spreader bar up far enough, you can even force your sub to bend forward, or force him up on his toes.

Stand your sub up under a high anchor point (ceiling hook, basement beam, closet rod, or something similar). For more on how to setup an anchor point without any wall/ceiling damage, see this post. Tie or cuff your sub’s hands, then hoist them up over the high anchor point, leaving some slack for now. Then slide the spreader bar between  his arms and under his chin.

Or, you can do the same thing, but make him put his head forward and slide the spreader bar between his arms and the back of his neck.

12. Use it as a simple way to punish your sub, while keeping him at the ready to provide service for you.

Put your sub on his knees under a higher anchor point (ceiling hook, basement beam, closet rod, or something similar).  Use a secure method to keep him in the kneeling position, such as using rope or straps to secure his legs to his thighs, or tying his balls to his ankles, or using a second spreader bar between his ankles and tying his balls to the center eyehook.

Or, you can do the same thing, but make him put his head forward and slide the spreader bar between his arms and the back of his neck.

13. Stretch your sub on a harsher version of a rack or a makeshift rack.

Lay your sub on the floor between two anchor points on the floor. Tie or cuff his wrists and ankles using soft rope or leather/velcro cuffs, leaving some slack for now. Place the spreader bar between his arms and the back of his neck, then pull the rope taut so he’s forced to keep his head angled up.

15. Put your sub in the ultimate stress position.

Or, connect his restrained hands to the middle eyehook, tied balls to the top eyehook, and feet to the bottom eyehook, for a tougher variation of the same thing.

That’s it. We hope you enjoyed and find some use for this tutorial. If you have any additional information or corrections, please write us under

Also, go check out bondagepredicaments website. He has loads of more hot stuff you might wanna look at.